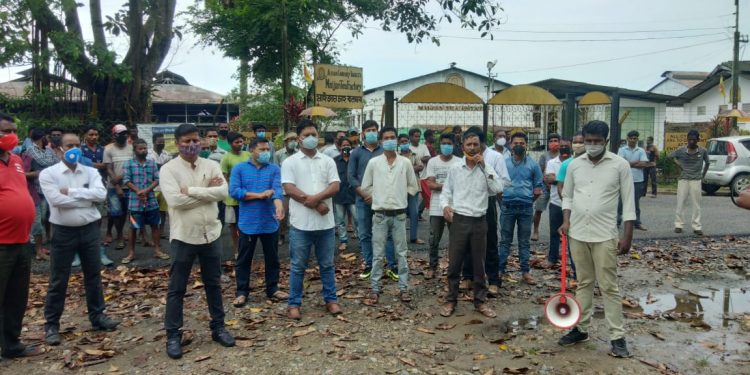 The workers of Maijan Tea Estate on Tuesday staged a protest in the garden at Assam’s Dibrugarh district seeking basic amenities from the garden management.

The Assam Company India Limited (ACIL), which is the world’s oldest tea company owns the garden.

These workers have been demanding solution to several problems faced by them.

In July 2019, the Maijan tea estate had created a world record with its gold tip tea by fetching a price of Rs 70,501 per kg in the auctions at the Guwahati Tea Auction Centre.

“The living quarters of the tea garden workers should be repaired. We are forced to live in cramped conditions in the dilapidated quarters that measures eight by eight feet,” a worker said.

“Since the garden authorities have not taken up repair works for many decades, we have decided to carry out the repair work with our own money. The garden authority should provide us with a no-objection letter so that we can go ahead with the renovation works,” he said.

Nabin Keot, the central vice president of Assam Chah Mazdoor Sangha (ACMS) admitted that the garden has been facing several issues, which have gone unheeded by the management.

“The workers are facing many problems as they have to live in dilapidated quarters and they also do not get their salary on time,” Nabin Keot said.

“Neither doctors, nor are medicines available in the garden hospital. There is no ambulance to even shift serious patients to the Assam Medical College and Hospital,” he said.

The ACMS leader added that under the Plantation Labour Act, 1951, the tea garden workers are entitled to firewood, tea, mosquito nets, slippers, healthcare and educational services among other things.

The workers have also threatened to launch an indefinite strike from June 21 if the garden management fails to solve their issues.

They submitted a memorandum containing their demands to the chief manager of the tea estate.

Copies of the same were also sent to the Dibrugarh deputy commissioner, superintendent of police, assistant labour commissioner and the Assam Chah Mazdoor Sangha general secretary.