Grocery shops allowed to operate from 11 AM to 4 PM on Mondays, Wednesdays and Fridays 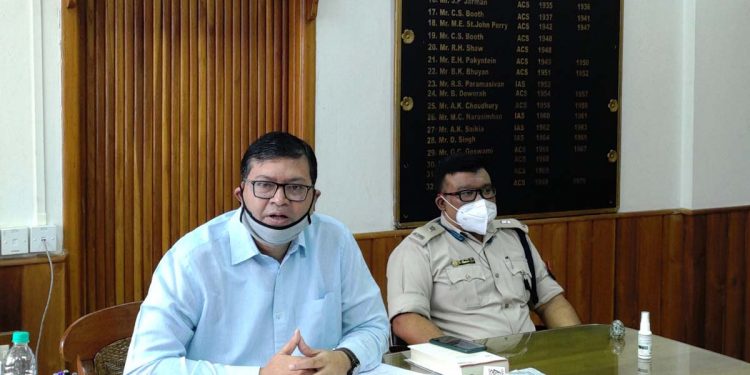 The Dima Hasao district administration has imposed lockdown for two weeks in the district from July 6-19 to curb community transmission of COVID19 after detection of 6 positive cases.

“This step has been taken in order to curb the community transmission of COVID19 after 6 positive cases were detected, 5 of whom are frontline officials and one is a family member,” deputy commissioner Paul Barua told reporters during a press conference on Sunday.

The press conference was held at the office chamber of the deputy commissioner in Haflong in pursuance of the directives of the Assam government and the Union Home Ministry.

Addressing the media persons in presence of additional superintendent of police Manabendra Gogoi, the deputy commissioner said, “The police administration has been instructed to ensure strict compliance of the order as per the guidelines issued throughout the district.”

Informing the media that this order came into effect on approval from the Assam government regarding recommendations forwarded from his office on Saturday after an emergency meeting was held at the CEM’s conference hall between the NCHAC Executive Members and the representatives from district administration.

The emergency meeting on Friday was also attended by officials of the line departments actively involved in the fight against COVID19 pandemic.

“As per the guidelines grocery shops have been allowed to operate from 11 AM to 4 PM on Mondays, Wednesdays and Fridays with requisite 30% shops open on these days,” the DC said.

Wearing of face masks, using of sanitizers and maintaining social distancing will have to be ensured by the people and responsibility of which will be on the shop owners, failure of execution may even entail summary closure of defaulting shops, the deputy commissioner said.

Maintenance of the price line and prevention of artificial shortage will be responsibility of the shopkeepers and Food, Civil Supplies & Consumer Affairs department and would be strictly enforced.

Whole sellers of grocery items are allowed to replenish stocks of retailers on Sundays and Thursdays between 3 PM and 6 PM while no retail selling is allowed during this period, the DC said.

Activities relating to essential items supply from the FCI establishments shall be allowed to operate and e commerce between 11 AM and 4 PM on Fridays only.

Roadside vending of any fruits, vegetables and fish will not be allowed. No haats, fairs, weekly markets shall also be allowed.

List of licensed grocery shops enlisted with the Municipal Board office will be checked to issue permits based on regulations.

Activities that will not be allowed during the lockdown period are all private offices and institutions, all business establishments, shops and outlets other than grocery shops, all weekly or periodical markets and fairs and all public and private or commercials vehicles

All subject to maintenance of proper sanitation and hygienic condition by the lessees.

Passes will be issued from the district administration through e-pass via email helpdesk.dcdimahasao @gmail.com/ whatsapp No. 7576943253 in case of any emergency.

Maibang Sub-divisional office will issue the passes for jurisdiction under the Maibang sub-division.

The guideline further stated that all restrictions are imposed as per the order issued by the state government on June 26, 2020 shall remain in place.