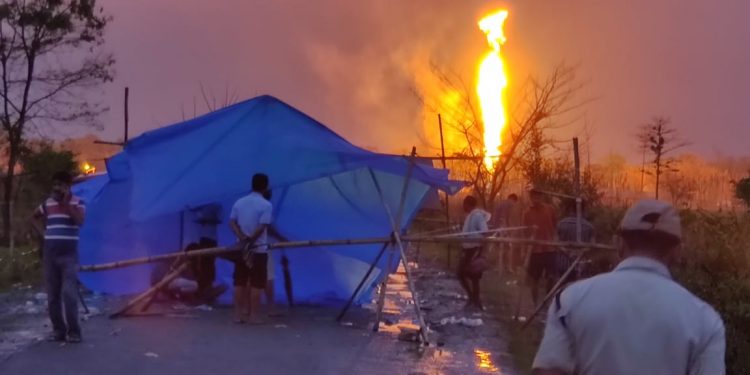 A barricade was erected by local villagers blocking the road from the Baghjan well site since Saturday afternoon after a fish farmer, Sukleswar Neog (45), allegedly committed suicide.

Over 200 personnel from OIL, ONGC, Alert, Schlumberger and other contractors working at the site including OIL directors were not allowed to go out of the site after completing the day’s work on Saturday.

After prolonged efforts by OIL Management and District Authority, the barricade was removed but as late as at 2.30 hours this morning.

According to locals, Neog committed suicide for alleged mental harassment caused because of the blowout and the delay in finalizing compensations.

Neog committed suicide by consuming pesticides and he was recovered laying on the road just 300 metres from the relief camp.

Locals said his house was partially damaged in the fire and from then he was staying at the relief camp.

The deceased is survived by wife Reboti Neog and five daughters.

Under the banner of Baghjan Gaon Milanjyoti Yuva Sangha, the local people demand compensation of Rs 2 Crore for the deceased family.

“We have demanded a compensation of Rs 2 crore for the deceased family but Tinsukia district administration has told that he would provide Rs 5 lakh as compensation,” said a villager of Baghjan.

On the other hand, OIL on Saturday provided Rs 20 lakh with each to 11 families of Baghjan whose houses were completely burnt during the Baghjan incident on June 9.

However, Impact assessment study prior to Capping of well is completed. Next phase of the study to be conducted post Capping operation.

Survey job for assessment of damage for compensation in  Doomdooma Circle till Saturday is 596 however survey could not be carried out yesterday due to blockade by local people.

The total number of families surveyed till Saturday both combined in Tinsukia and Doomdooma Circle is 1751.

Due to stoppage/blockades, there was production loss of 442 MT of Crude Oil and 1.62 MMSCM of Natural Gas as reported on Saturday.