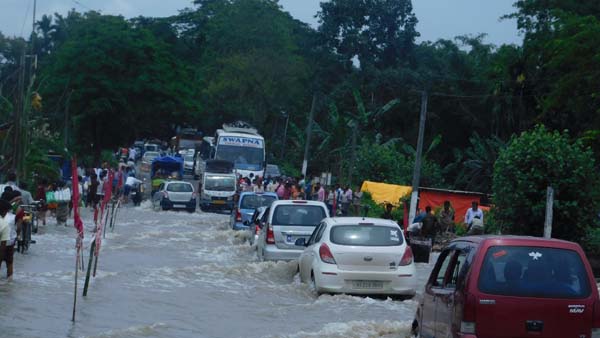 Several villages in the Lakhimpur district of Assam have been affected by the flood waters of Singara river.

Highway NH-15 is flooded with waters of Singara river, in upper Assam district for the last several days.

The flood water of Singra river breached one of the PWD road near Dolohat  tinali.

The flood waters has caused severe traffic on the highway, which connects to the Dhemaji district and parts of the two district of Arunachal Pradesh.

The Singara River is a tributary river coming from the hills of Arunachal Pradesh.

Security personnel and district administration are helping the passenger vehicles to cross the stretches of the submerged roads.

Meanwhile the flood water of Gohpur affected several villages in Gohpur sub-division in Biswanath district, north bank of Brahmaputra due to incessant rain in Arunachal Pradesh.

Lakhimpur is the worst affected district, with over 21,200 people affected, followed by Dhemaji where around 1,200 people were reeling under the deluge.Currently, 29 villages are inundated and 959 hectares of crop areas have been damaged.

Flood waters have damaged embankments, roads and other infrastructure in Biswanath and Barpeta districts, where heavy erosion have taken place.