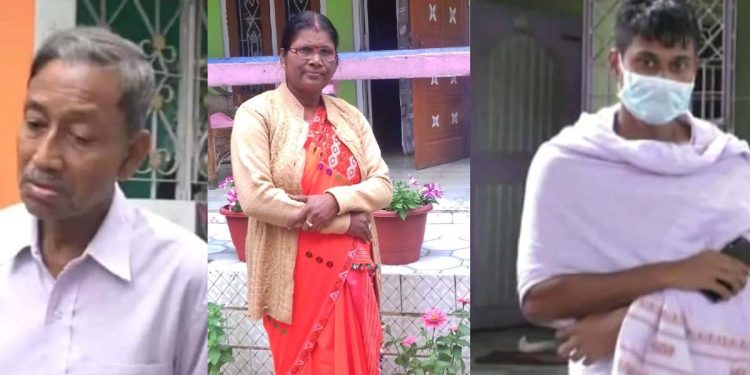 In a major twist of events, Udalguri Police were finally able to make a breakthrough in the much-hyped case of the recovery of a 53-year-old lady teacher’s body at Kalaigaon.

The victim, identified as Nayantara Sahariah, was a serving high school teacher.

Her semi-nude body was found with the face completely distorted due to concentrated chemicals in a classroom of U.N. Academy, a private school of Kalaigaon town in Udalguri district on July 7.

Udalguri Police after preliminary investigation of Sahariah tightened their noose around the family members of Sahariah and arrested her husband, Upen Barua, eldest son Hirak Jyoti Barua, domestic maid Yashoda Rabha and a mason, Newaj Ahmed on suspicion of their involvement in the crime.

All the arrested persons were produced before the judicial court at Udalguri on Sunday afternoon and they have been remanded to 7-day police custody for further investigation.

Sources said prima-facie it appeared to be a case of rape and murder but medical reports have not corroborated the same.

It is suspected that extra-marital affair maintained by the lady teacher’s husband may be the reason behind the killing.

The entire investigation was assisted by a team of the Criminal Investigation Department (CID) of the Assam Police and forensic experts after Assam chief minister Sarbananda Sonowal taking cognizance of the case directed the investigating agency to look into the matter and assist the Udalguri Police.

Meanwhile, a number of organizations including Kalaigaon unit of All Assam Students’ Union (AASU), All Assam Jatiyatabadi Yuva Chatra Parishad(AJYCP), Nari Mukti Sangram Samiti(NMSS) and All Koch Rajbongshi Students’ Union(AKRSU) Udalguri unit have demanded that the case be tried in a fast-track court.

The victim, who went for a morning walk on July 6, remained missing and later her body was recovered in a classroom of U.N. Academy, located about 100 metres from her residence.