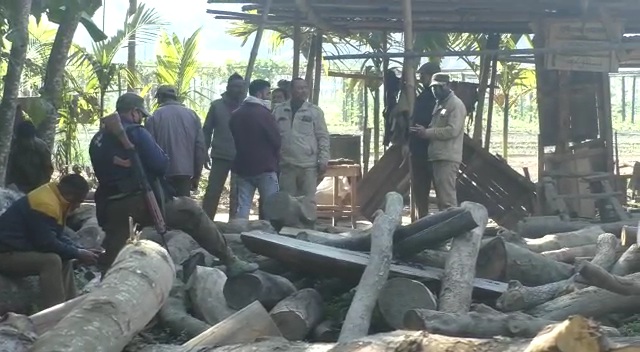 The Kundil Kalia Reserve Forest at Sadiya in Assam’s Tinsukia district is losing valuable timber to smugglers, who cut down trees even in broad daylight.

The Kundil Kalia Reserve Forest in Sadiya falls under the Doomdooma forest division of the district.

According to sources, the timber smugglers are cutting Katha trees on a regular basis in the reserve forest.

The trees are generally used for extracting colours to dye clothes.

Kundil Kalia reserve forest is a prime habitat of eastern Hoolock Gibbon but the rampant deforestation has forced many of the gibbons to shift their habitat.

Not only Kundil Kalia, other reserve forest like Sunpura 12 mile, Hollow Gaon and Deopani Reserve Forest in Sadiya are facing deforestation due to rampant cutting down of trees by the timber smugglers.

These smugglers are hand in gloves with forest officials and from time to time they cut down valuable Katha trees from the reserve forest,” alleged Debojit Moran, secretary of Green Bud Society, an NGO working towards environment conservation.

Moran further said, “Most of the timber laden trucks directly go to the saw mills of Dhola. Many illegal saw mills are functioning in Dhola without any proper document and most of them procured logs from the reserve forest illegally.”

Locals as well as several environment activists have tried to bring it to the notice of forest officials, but no action has been taken so far.

“The principal chief conservator of forest have no time to come here to see the reality,” Moran said.

Rajib Kumar Das, DFO, Doomdooma Forest Division said, “Our forest team has been engaged in regular patrolling in the area. We are trying our best to stop cutting down of trees.”

“Last week one timber smuggler fled from the scene after seeing the forest team. Recently, we launched a combing operation at the Tarani Reserve Forest under Khatangpani forest range and seized many things from the smugglers,” he said.