The expedition was organized as a pre-Everest selection drive 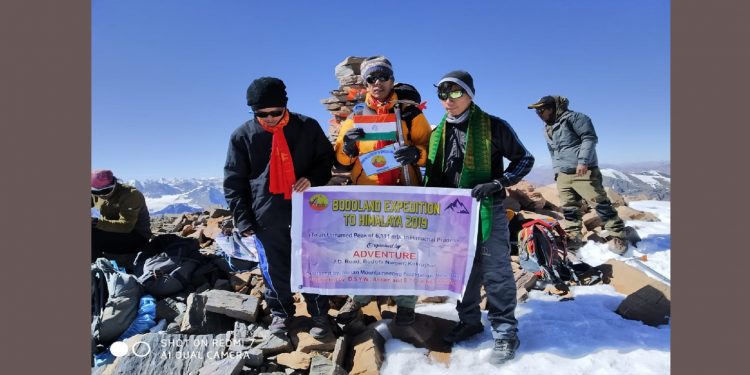 The mountaineers from Kokrajhar after scaling the summit. Image: Northeast Now

A six-member mountaineering team from Kokrajhar on Monday unfurled the Indian flag after successfully scaling an unnamed peak (6111 MTR ) in Himachal Pradesh near Baralacha Pass.

The expedition was led by seasoned mountaineer Dr Jagadish Basumatary.

The expedition was organised by Adventure NGO- the premier adventure organization of Kokrajhar.

Adventure NGO’s president Mananjay Daimary said, “The team left Kokrjhar on September 2 and established a base camp near Bharatpur at an altitude of 15600ft on September 6.”

“After negotiating a long stretch of loose moraine area the team established summit camp on September 8 at a height of 18,100ft.

Dairmary also informed on September 9 the team started climbing at around 4.30 am and three members reached the summit at 1.30 pm and unfurled the tricolour and Adventure NGO flag with Aronai.

The expedition was organized as a pre-Everest selection drive.

For Adventure NGO, it was a part of the Bodoland to Mount Everest Mission 2019.