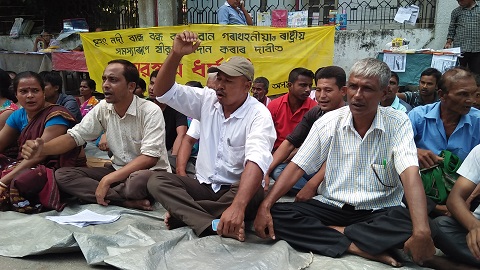 The Krishak Mukti Sangram Samitee (KMSS) on Friday staged sit-in protests at all the district headquarters across Assam in protest against the mega dam at Lower Subansiri and demanding that the flood and erosion be declared as a national problem.

In Guwahati, KMSS protestors sat for a sit-in demonstration in front of the Meghdoot Bhawan at Panbazaar.

The sit-in demonstration that began at 11 am continued till 1 pm.

The protestors vented their anger against the Bharatiya Janata Party (BJP) and alleged that the saffron party had gone back on its promises.

The KMSS alleged that ahead of Lok Sabha election in 2014, the BJP had promised that the party would dismantle the project if voted to power.

But now after the BJP wrested power, the party has changed their stance saying the project is necessary for development.

The protestors were of the view that if the mega dam at Gerukamukh is allowed to be constructed, it will cause widespread devastation.

Notably, the construction work of the project has remained suspended for some time now in the wake of protests by KMSS and other organizations across the State.

Speaking to Northeast Now, KMSS joint secretary Mukut Deka said that similar projects in Arunachal Pradesh, Nagaland and other places have been halted in apprehension of possible calamities.

The KMSS also alleged that hydro-electric projects like the ones at Ranganadi and Doyang have caused extensive damage and unleashed untold miseries to innocent villagers across Assam when these projects release access water during the monsoons.

The protestors also demanded that the flood and erosion in the State be declared as a national problem.