Assam: Journos in Silchar protest against assault on scribe

Journos of Silchar protest outside the Cachar DC's office on Tuesday against assault on a fellow journalist in Hailakandi. Image credit - Northeast Now

The entire journalists’ fraternity of Silchar on Tuesday protested outside the Cachar deputy commissioner’s office against assault on a reporter, working for a regional news channel, by a police constable.

Rajesh Das, a reporter from Hailakandi, was assaulted by a police constable identified as Rajesh Suklabaidya on Sunday.

The agitating journalists (print, electronic and digital) from Silchar in Cachar district strongly condemned the dastardly act of the policeman.

The journalists also took out a protest rally holding placards.

They shouted slogans like ‘Assam police hai hai’, ‘Hailakandi police hai hai’, ‘Beating of innocent journalists won’t be tolerated’ and ‘We want justice’ which reverberated the air in the Officepara area of Silchar.

Journalists, both young and old, took turns in venting their anger for such an act that has left a fellow journalist of Hailakandi, battling hard to recover from the severe assault.

“We demand that the guilty policeman be given stringent punishment, nothing short of being dismissed from his service,” Uttam Saha, a senior journalist of Anandabazaar Patrika, told Northeast Now.

“Facing pressure from the protesting journalists of Hailakandi, we have learnt that Rajesh Suklabaidya has been taken in custody by the police. This alone is not enough and we want his termination from service, a service which is meant to protect civilians’ lives,” added Saha.

Aniruddha Laskar, a senior journalist and bureau in-charge of South Assam for News18 Network, talking to this correspondent, said, “What this police constable did is nothing less than an attempt to murder.”

“Only because of Rajesh Das filing a news a year back where he had exposed the constable taking bribe from people who turned up for NRC’s claims and objections,” he said.

“For the offence the policeman was also put under suspension for three months. But an evil design was hatched by constable Rajesh Suklabaidya to take his revenge and that is what we have witnessed on July 21 night,” he said. 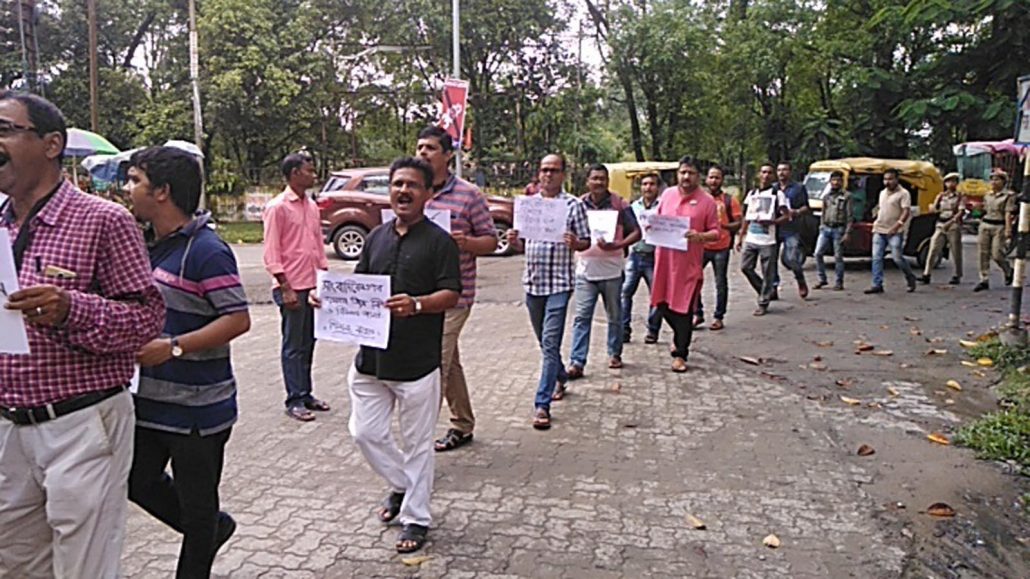 Laskar added, “Such sort of inhuman actions can happen to us also, any day, for which, we have decided to submit a memorandum to Assam chief minister Sarbananda Sonowal, through the DIG Southern range, Prashanta Kumar Dutta.”

“We want stringent action against the guilty and seek protection to the media fraternity. We work in trying conditions to highlight issues of the society, good or bad, for our own districts, and the state as a whole. If we become a target, then what are we going to show or write for our own denizens,” he added.

Later in the evening, the protesting journalists took out a rally from the DC’s office to the DIG Southern Range’s office and handed over the memorandum to be forwarded to the Assam chief minister.

In his first remark to the protesting media personnel, Prashanta Kumar Dutta, DIG, Southern range, said, “A full-scale inquiry into the incident would be carried out.”

“We can assure all of you on behalf of Assam police that departmental actions would be taken against this offending constable, Rajesh Suklabaidya at the earliest,” added Dutta.