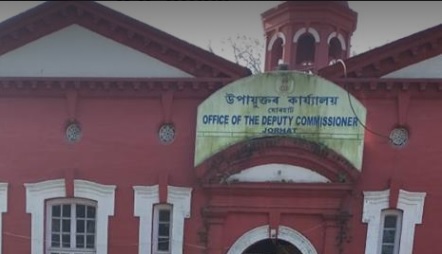 A part of the office of Jorhat deputy commissioner in upper Assam was declared a containment zone on Tuesday after an employee of the office tested positive for Covid-19.

Jorhat deputy commissioner Roshni A Korati said that eight new positive cases were reported in the district on Tuesday.

“One grade IV employee of DC office, Jitumoni Sharma, has tested positive for the infection. Hence, the building to the east of the main DC’s office building has been declared a containment zone. The building houses Bakijai, Land Acquisition and NRC branches,” the DC said.

She said all employees of the branches have been asked to remain in home quarantine and will be tested.

A source said that Sharma, who had no travel history resided near Ariya Vidyapeeth, Sonarigaon Baligaon.

While Sharma has been sent to Jorhat Medical College and Hospital (JMCH) his wife, son and mother have been quarantined in a hotel in Jorhat.

Of the seven others, who tested positive three do not have any travel history.

Meanwhile, the district administration has filed an FIR against Manas Dutta and Leemashree Baruah for organising a marriage ceremony which violated government orders on COVID-19 norms.

Jorhat got its first containment zone at the Sonari Gaon area after a 29-year- old youth, Lakhyajit Bordoloi, who had returned from Diphu recently tested positive for Covid 19 on Saturday.

The wedding at Tarajan Sonarigaon which Lakhyajit had attended reportedly was thronged by more than 700 people.

As per reports, 221 people have been identified to have had primary and secondary contacts with Lakhyajit, who had returned from Diphu on June 12.

Mariani MLA Rupjyoti Kurmi and his wife, children and three security personnel were among the 221 people, who had attended the wedding.

Kurmi’s wife is a cousin of the bride. All of them are now under home quarantine

Lakhyajit, had got himself tested for Covid 19 as he was feeling unwell but had ignored doctors advice to stay at home and had visited several places including Assam Agricultural University where his wife resides.

Subsequently his parents tested positive for the infection.

The Irrigation department where his father works is also now off limits with all itsv employees quarantined.