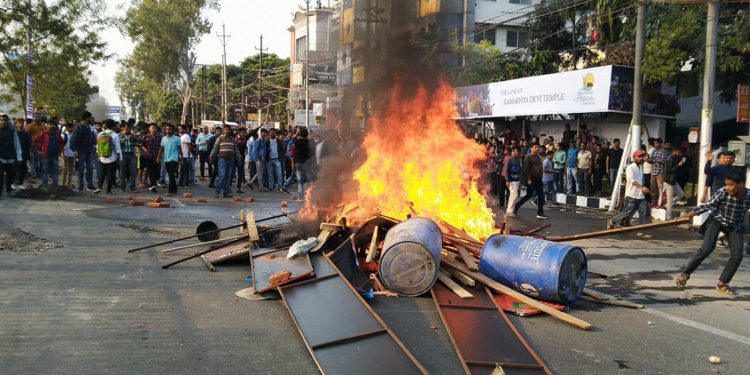 Assam’s capital in Dispur, on Wednesday, was under siege by thousands of people protesting against the Citizenship (Amendment) Bill.

Once again, Assam is in turmoil.

In a spontaneous response to BJP’s approach to implementing the Citizenship (Amendment) Bill, protesters assembled around Dispur shouting slogans.

It was a playback of the Assam Movement of 1983, when thousands of protesters, mostly students (both boys and girls), laid a siege around Janata Bhawan, the state secretariat.

Once again, the students burnt tyres around Dispur and shouted slogans.

“Aahoi-aah, ulai aah (come one, come all..),” the anthem of Assam Agitation, rent the streets once again.

Police resorted to lathi-charge, used water cannons and fired tear gas shells, still could not bring the situation under control for several hours.

It was evident that Sarbananda Sonowal-led government struggled hopelessly to establish a semblance of authority.

The students appealed to the residents of Guwahati to step out of their homes and join the war against the BJP.

“Ei jui jolisey, …..joloboi (the fire has been ignited, and it would continue),” the protesters shouted.

In full-throated war cry against BJP, thousands choked GS Road, the main road of Guwahati city, to force the immediate withdrawal of the CAB from Assam.

The passion of the protest reminded people of the days of the Assam Movement of the 1980s.

Since then, Guwahati had never seen so many people come out on the streets for any cause.

The protesters continued to shout, “BJP Go back,……Go Back,….Go back.”

It is obvious that people are angry with BJP government’s move to pass the CAB in Rajya Sabha on Wednesday.

If not handled properly, the situation across Assam is sure to get worse.