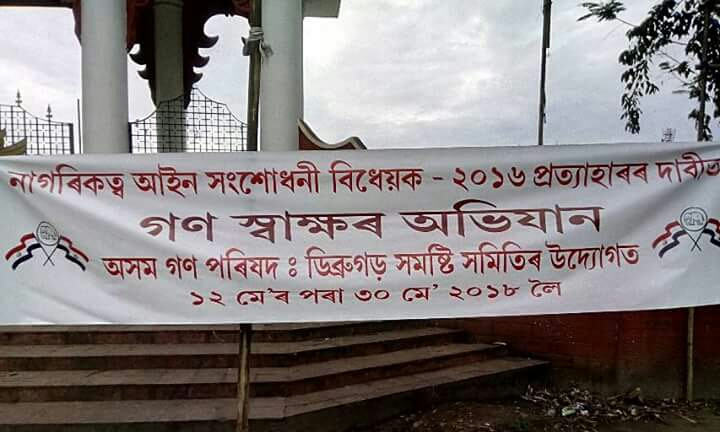 Hundreds of people on Sunday signed a petition against the Citizenship (Amendment) Bill, 2016 during an AGP-sponsored signature campaign against the controversial bill at the Chowkidinghee playground here.

The Asom Gana Parishad (AGP) despite being an ally of the ruling BJP in Assam has been a staunch opponent of the bill and has launched a state-wide signature campaign against the bill from May 12. The party is planning to collect as many as 50 lakh signatures from across the state before sending it to the Joint Parliamentary Committee (JPC) which is reviewing the bill.

AGP Dibrugarh district president Punakan Baruah on Sunday said that the signature campaign has been a huge success with people turning up in large numbers to sign the petition.

“The response from the public has been overwhelming. Already more than 12,000 people have signed the petition against the Citizenship (Amendment) Bill, 2016. People have come out spontaneously from every part of the district to participate in the campaign since they are aware that the bill is not in their interest. The campaign will go on till May 30 after which the entire signatures will be sent to the JPC,” Baruah said.

The bill, if passed, will grant citizenship to Hindu Bangladeshi migrants from the neighbouring nation who has come to India till December 31, 2014.

The AGP which is the principal regional party of the state has been advocating for implementation of the Assam Accord according to which March 25, 1971 should be the cut-off date to identify illegal citizens irrespective of their religion.