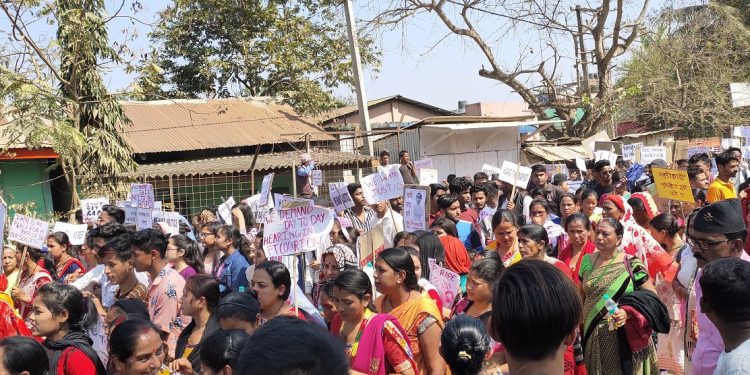 Around 5000 people from all walks of life including school students, college students, different organizations jointly took out a rally, demanding death sentence for the perpetrator who allegedly raped and killed a five-year-old minor girl at Dariyabasti in Hojai on Thursday last.

The accused Bikram Harijan, alias Chandan (25), a neighbor of the victim has been arrested on Thursday itself and is in police custody for last four days.

People of greater Hojai took out the rally which began from Bihutoli field on Sunday morning which traversed through major roads of the town and culminated at Hojai police station.

Thousands joined the rally holding placards which read ‘Rapist be Punished, Hang Rapist, No mercy for rapist, No Justice No rest,’.

They also shouted slogans like ‘We want justice’, which echoced the entire town.

“We appeal the government that the culprit must be hanged and they should immediately condemn this gruesome attack on humanity,” said Sanjib Chetri, president, Gorkha Samellan Hojai district unit.

“Such incidents tarnish the society and create fear pshychosis, the culprit should be given such punishment that a message goes that whoever dare to commit such crime will have to face serious consequences,” said a protester.

A similar memorandum to chief minister Sarbananda Sonowal will be forwarded through deputy commissioner of Hojai.

Through the memorandum, they have demanded to refer the case of the victim to fast track special court under POCSO; death sentence for the perpetrator; immediate settlement of government financial aid to aggrieved parents and establishment of police outpost at Nandapur area.