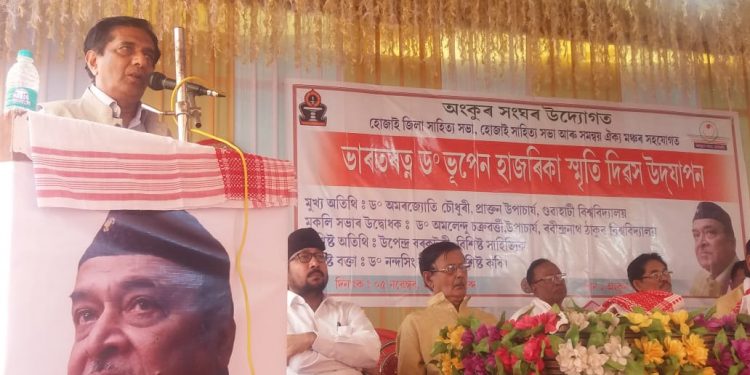 People from all communities paid floral tributes, earthen lamps were lit up in front of the newly unveiled bust of the balladeer.

The programme was held at Ankur Sangha premises in Bishnupally on the town.

The bust of the music legend was unveiled and foundation stone of a library was laid by Dr Amarjyoti Choudhury, former vice chancellor of Gauhati University.

A plantation drive was also carried out in the Sangha premises.

A open meeting was presided by Dr S D Goswami where along with other guests Tanmoy Pratim Borgohain, deputy commissioner of Hojai and Dr Amlendu Chakraborty, vice chancellor of Rabindranath Tagore University shared the dais.

Speaking on the occasion, chief guest Dr Amarjyoti Choudhury asserted, “Hazarika always taught us the lessons of humanity and advocated working for deprived ones of the society.”

“Transcending the boundaries of country and region, Dr Hazarika was able to establish Assamese identity on the global cultural map and introduced the world to the music and culture of the land.” he added.

“It was the dream of Dr Hazarika to build a greater Assamese society based on the humanitarian values and we must strive hard to realize his dreams following his ideals of universal brotherhood,” Choudhury reiterated.

He further stressed that along with Assamese language we need to try to learn the languages of other communities residing in Assam for promoting peace and tranquility.

Various other eminent guests spoke on the occasion which was followed by Bhupendra Sangeet and dance competitions.