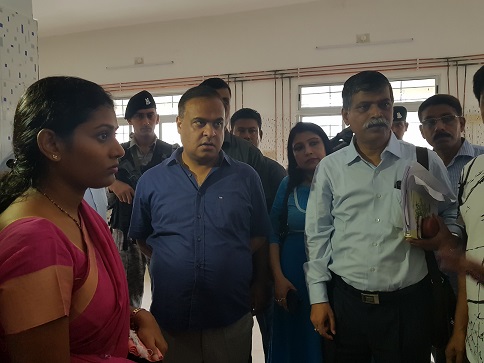 Assam Health Minister Himanta Biswa Sarma on Tuesday visited the Assam Medical College and Hospital (AMCH) in Dibrugarh and took stock of the progress of the Mother and Child Hospital.

Sarma later announced that the hospital that will exclusively cater to newborns and mothers will be completed within the first week of September this year. He also said that the super speciality hospital building that will house six departments should be ready by January 2019.

He added that the preliminary construction work of the level-1 cancer hospital is going on in full swing. The ground plus 5-storied cancer hospital building is being constructed in a 4-acre plot of land inside the AMCH campus.

Replying to a query, regarding the deplorable condition of the NH-37 in Dibrugarh, Sarma who also holds the PWD portfolio said that the state government has sanctioned an amount of Rs 32 crore for repairing the highway from the starting point of the Dibrugarh town bypass  to the ending point of the bypass . The work will start from the last week of August.

Reacting to the comment of West Bengal CM Mamata Banerjee regarding the National Register of Citizens (NRC), the minister said that the NRC is a full proof and transparent process which is monitored by the Supreme Court.

“No one should worry about the NRC updation process which is being monitored by the honourable Supreme court. Mamata Banerjee should understand the entire process of the NRC before making any comment,” he said.