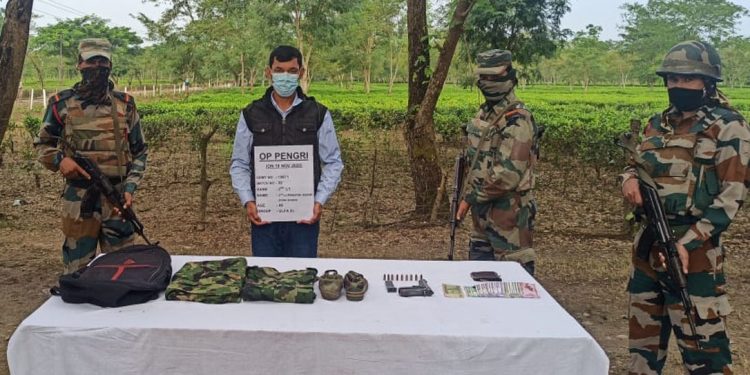 In a joint operation launched by the troops of Spear Corps of Indian Army and police, a hardcore ULFA(I) cadre was apprehended at Pengeree in upper Assam’s Tinsukia district.

The ULFA(I) cadre, nabbed on Thursday, has been identified as self-styled second lieutenant Prantik Asom.

He was apprehended along with one .32 pistol, one magazine and 9 live rounds of ammunition.

Sources said the apprehended cadre was the chief of the logistics and administration of the ULFA(I) camps in Myanmar.

He was also a close aide of Arunodhoy Asom, a top-level leader of the ULFA(I).

The apprehended ULFA(I) cadre and the items recovered from his possession were handed over to Tinsukia Police for further investigation.

His arrest has been termed as a major blow to ULFA(I).

The outfit recently suffered a major crisis after the surrender of its deputy commander-in-chief Drishti Rajkhowa.