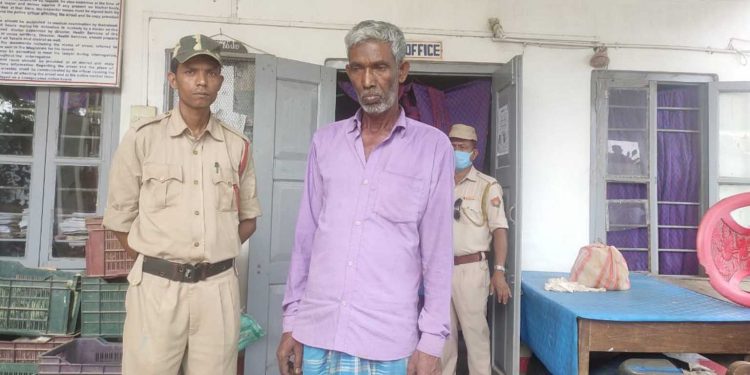 One of the three persons arrested by Hailakandi police for siphoning rice meant for poor. Image: Northeast Now

Hailkandi police on Wednesday arrested some persons for allegedly siphoning rice and flour wheat meant for the poor.

Hailakandi  Superintendent of Police Pabindra Kumar Nath informed the media that a huge quantity of rice and wheat was recovered from 299 Berakhalerpar LP School under Mohanpur Part II of Algapur circle on Wednesday.

“45 bags of rice and five bags of wheat flour, each bag containing 50 kg of grains, weighing around 2500 kgs were recovered from the school used as a godown,” Nath said.

When the police personnel reached the site, they found the main door of the school was locked from the outside.

“But when we opened the main door, we found a person inside with stockpiles of the essential commodities,” Nath added.

Nath further informed that they are looking for the absconding fair price shop dealer, Ainul Hoque, who happens to be the president of the school management committee of the school.

“Ainul on Tuesday told Algapur OC that he had received only 12 quintals of rice only in March and April,” Nath further said.

Nath further said that the food-grains stored in the school would have found their way in the open market had the police not acted timely.

Three persons have been arrested by the police in connection to the case and they are investigating it further.