The bilingual book (Assamese and English) was released by the governor at the Raj Bhavan, Guwahati in presence of the author’s family members.

Governor Mukhi appreciated the unique effort and beautiful design of the book.

Speaking on the occasion, the governor stressed on improving tea quality, increase export and betterment of workers in the industry.

After the release of the book, Baruah said: “It is a matter of great honour to me that the Hon’ble Governor of Assam, Prof. Jagdish Mukhi, has just released my book of tea quotations, ‘Cheering Cuppa – the Magical Brew ‘ at Raj Bhavan, Guwahati, in presence of my family members.”

‘Cheering Cuppa: The Magical Brew’ is a unique colourful book of compilation of tea quotes of poems, songs, sayings, proverbs, beliefs, speeches and excerpts from all over the world by Dr. Pradip Baruah.

Dr Baruah is a tea researcher of Eastern India with an association with tea for about thirty seven years. 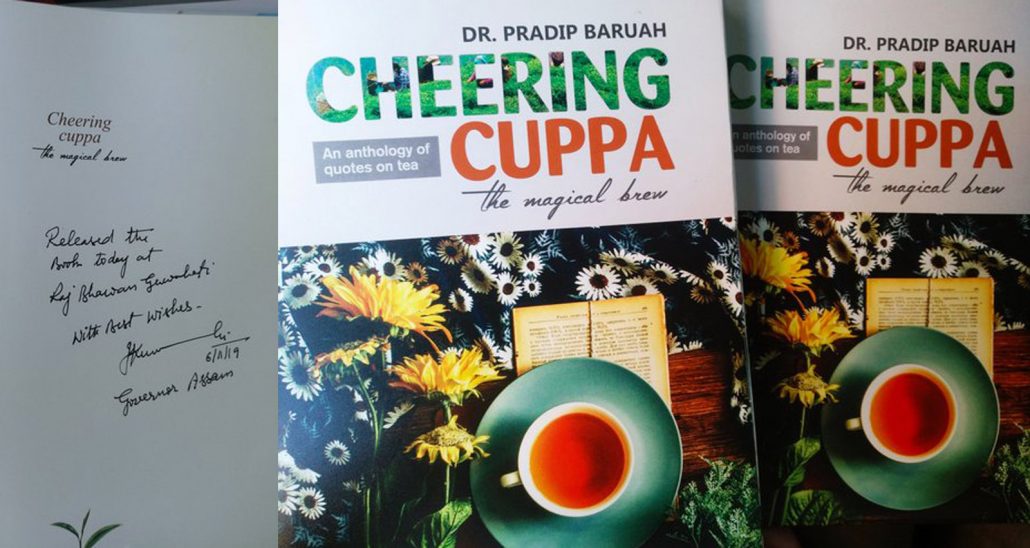 The book is a result of painstaking effort of the author for almost three decades with collections from top tea growing countries of the world.

He is also author of four valuable books in English and Assamese on tea industry of Assam and encyclopedia of Assam.

The book is an attempt to present tea to the tea lovers of the world and the general readers from a different perspective of literary world in an attractive international standard of publication from Assam.

Tea is the highest consumed beverage in the world and its consumption is next only to water.

Discovered in China about 5,000 years ago in 2,732 BC, the consumption of this beverage made from green leaves harvested and then processed to its final form has spread all over the world.

The small tea growers though started tea growing late are a major contributor to India’s total tea production with a share touching about half of India’s production.

An estimated one lakh small tea growers exist in Assam who contribute an estimated about 48 per cent to the state’s total production and it is constantly increasing.

Assam, being one of the places of origin of tea, has the unique quality and liquoring characteristics of black tea recognized as the best in the world.

The bilingual book of tea quotes has an equally attractive Assamese section too.

The lifestyle of the tea garden workers of Assam is reflected in their folk songs jhumur and the book contains a good collection of them too in the Assamese part.

Renowned singer and lyricist Dr. Bhupen Hazarika’s numerous songs on tea garden are well collected in the book besides songs and poems of noted Assamese litterateurs.