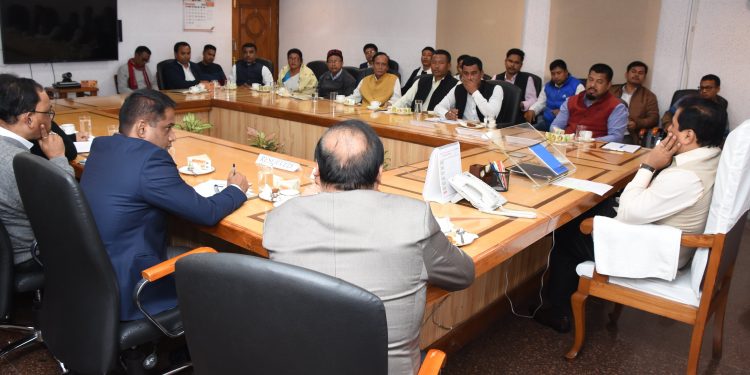 Assam CM Sarbananda Sonowal in a meeting with the representatives of Moran community organisations at his conference hall at Janata Bhawan on Thursday.

In order to douse the anti-Citizenship Amendment Act (CAA), 2019 fire in Assam, the BJP-led state government has announced a slew of sops for different communities of the state.

The Assam government on Thursday announced that it would submit the recommendation of Group of Ministers for providing Schedule Tribe (ST) status to 6 communities of the state to the central government within January.

Moreover, the state government also announced to provide Rs 125 crore to each of the communities of Ahom, Chutia, Moran, and Motok covering four districts in the state for generating self- employment opportunities, infrastructure development, preservation of monuments and archaeological heritage.

The state government also announced to constitute an autonomous council for the Koch Rajbangshi community in the undivided Goalpara district along with autonomous councils for Moran and Motok communities in the state.

One extra seat would also be allotted for Moran community in a medical college of the state.

Funds would be provided by the state government for making a documentary on the life and works of Raghab Moran.

These assurances were made by Assam chief minister Sarbananda Sonowal on Thursday to the representatives of six organisations of Moran community at a meeting held at his conference hall in Janata Bhawan.

In a separate meeting held with the delegates of Sadou Asom Chutia Santha, the CM assured of considering the issue of declaring Sati Sadhani Divas as a government holiday.

He said an educational institute in the name of Sati Sadhini would also be set up while allotting fund for erecting busts of Sati Sadhini in the Chutia community dominated areas.

Speaking in both the meetings, the CM said the state government had been working resolutely for the all-round development of indigenous communities of the state and strong steps had been taken for their socio-cultural and economic development.

He also urged the communities to give proposals to the government for ushering in their rapid development through the implementation of ‘Bhasha Gaurab’ scheme.

He also stressed on the need to uphold the spirit of unity and harmony among all the communities of the state.

Assam finance minister Himanta Biswa Sarma, while speaking at the meetings, stated that the people would come to know about the steps taken for implementation of the decisions taken in Thursday’s meetings in the coming few days.

Problems of each community had been taken notice by the government and efforts were already made to find solutions to these problems, he said.