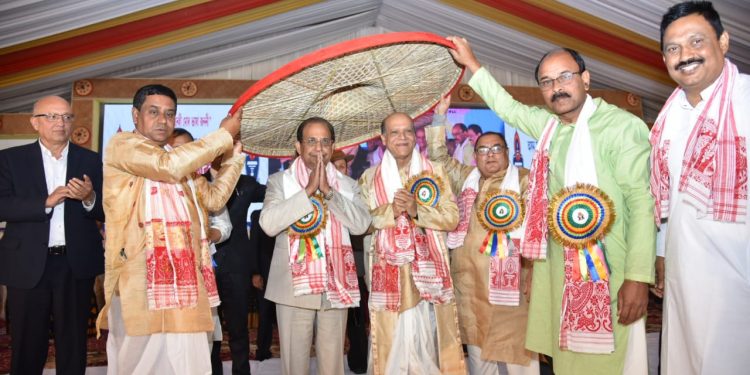 Assam Governor Prof Jagdish Mukhi on Monday said, language is not just a means of communication.

“It is a means through which we express our aims and aspirations and establish us as progressive individuals,” he said.

Speaking as the chief guest in the 75th biennial session of the Asom Sahitya Sabha  at Sualkuchi, Prof Mukhi said because of the insistence of Assam Sahitya Sabha, the cultural and literary progress of Assam have reached the level where it is now today.

“It is a matter of great satisfaction that Asom Sahitya Sabha since its inception has been doing well to thwart all challenges coming on the way of promotion of mother tongue as it has been very steadfast in the promotion, spread and enrichment of the Assamese language,” he added.

He said in the global arena, Assamese literature and culture have enjoyed a respectable position.

The Assamese literature since the days of Ahom Kingdom started its upward journey which further received a shot in its arm because of the unprecedented patronage from none other than Srimanta Sankardeva and his disciple Madhavdeva.

Numerous litterateurs have contributed to the enrichment of Assamese literature since then.

The Governor also observed that language holds a very important position in the socio-cultural and linguistic development of society.

He said, “Language is not just a means of communication. To a large extent it pervades our cultural and social life.”

“It is intrinsic to an individual and there is a special bond one shares with the mother tongue,” he asserted.

Referring to Gandhiji who once said without rashtrabhasha a nation is dumb, the Governor said Asom Sahitya Sabha should take adequate steps for ensuring an environment for largescale use of mother tongue.

He also said mother tongue is always required to express one’s feelings and emotions in his or her unique way.

The motto of Asom Sahitya Sabha ‘siro senehi mur bhasha jononi’ is indeed a testimony of the Sabha’s indulgence for mother tongue and promotion of culture and literature of Assam.

Prof Mukhi said, “Every community tries to uplift its own language.”

“With the same spirit Asom Sahitya Sabha was formed,” he added.

“In 1917 at Sivasagar under the founder president of Padmanath Gohain Barua, the first conference was held,” he recalled.

“With that humble beginning till now, Asom Sahitya Sabha through its regular discourses have been taking laudable steps for the enrichment and spread of not only Assamese language, but the promotion of culture and literature,” he added.

He also said it is a matter of great satisfaction that Sahitya Sabha has been striving hard to keep up Assamese literature and culture in the forefront despite all challenges they are facing.