Probably worried over the ongoing agitation over the Citizenship (Amendment) Act 2019, the BJP-led government in Assam has warned all its employees against using social media.

The Elementary Education department has recently issued a letter warning permanent as well as contractual employees against indulging in political activities by us in different social media like facebook, whatsApp, Twitter etc. 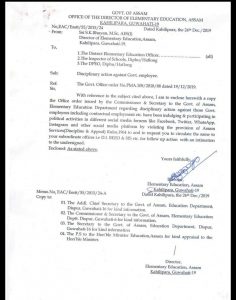 Director of elementary education department S K Bhuyan issued the order saying that disciplinary action will be initiated against those employees for violation of Assam Service (Discipline and Appeal) Rules 1964.

The warning and at a time when there is a surging protests over the CAA in Assam another parts of the region against the BJP led government at the centre and at the states.

Although the government had tried to contain the protests using different means like announcing one time financial assistance to the artistes and publishing job vacancy list and inviting applications, the agitation is far from being contained so far.