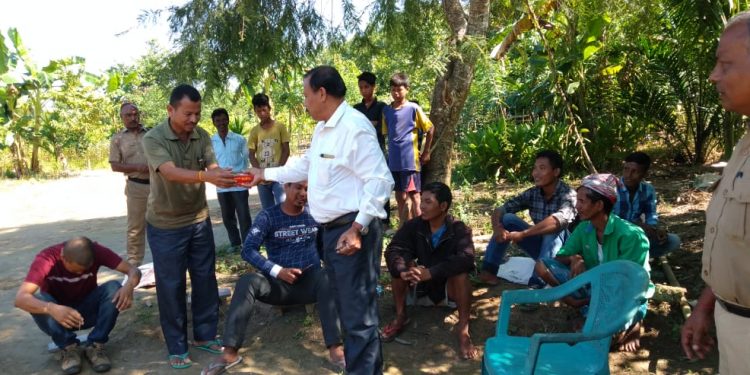 Goalpara forest department officials in an awareness programme on Sunday regarding the man elephant conflict and tranquilizing of the jumbo. Image: Northeast Now

The Goalpara district forest division of lower Assam has finished its preparations to tranquilize ‘Laden’.

The wild pachyderm has been unleashing panic in several villages of east Goalpara since last Tuesday by killing five people.

The Rongjuli range forest office has somewhat cordoned off the Kheropara reserve forest where the pachyderm presently.

On Sunday, the Rongjuli range forest office which has blocked all the exit elephant corridors from the Kheropara reserve forest is keeping a close eye upon the animal.

They even distributed crackers to the surrounding local villagers of Kankata, Sesapani, Kheropara so that they may also assist the department in compelling the pachyderm to stay it in its present location.

“I have personally met the villagers, sought their support and made aware them the risk of tranquilizing an elephant and the duty of the public at that moment,” informed Balen Ch Das, ranger of the Rongjuli range forest on Sunday.

“Besides, I have distributed crackers so that they may chase away the jumbo if it tries to take the village road to exit,” he added.

“If everything remains all right, we should be able to capture it on Tuesday,” he reiterated.

“The two trained elephants brought from the Manas wildlife sanctuary are also ready, special jute rope to tie the jumbo is also made,” added Das.

Meanwhile, Rajbongshi objected tagging of the animal as ‘Laden ‘, an infamous international terrorist and said ‘this is not acceptable to term an elephant like that’.

Moreover, this particular male elephant was undergoing through the sexually frenzied condition ‘musth’ when it becomes too irritating and attacks whoever comes on its way.

Besides, there is doubt that the same animal had taken lives of people earlier also.

“We should also keep in mind that it was the time of Diwali that the incident took place when crackers from all over the areas were exploding,” he said.

Both the officers rubbished reports that the department is trying to divert the elephant issue by postponing the neutralization.