Parimal Suklabaidya was the Chief Guest of the function 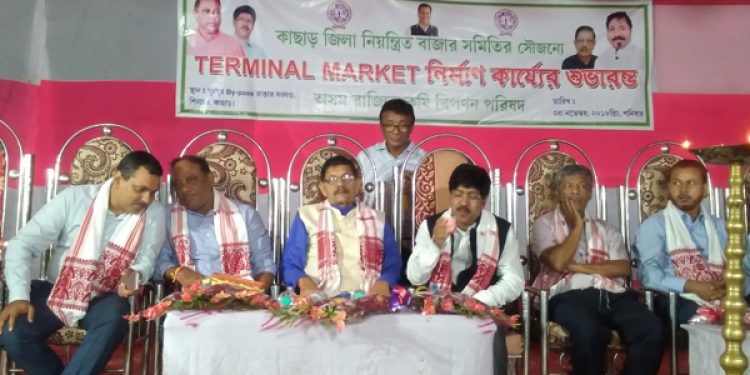 On a day when the whole of Barak valley came to a standstill following a bandh call as a mark of protest for the killings of five innocent Bengalis in Dhola, Ghungoor, on the outskirts of Silchar, was gearing up for a fruitful cause.

As the dawn to dusk bandh call on Saturday, finally ended, foundation stones were laid at Ghungoor, in the evening, to set up a ‘terminal market’ spread across 50 bighas of land.

An initiative of the Assam State Agricultural Marketing Board, this terminal market out the first of its kind in entire Northeast, would change the way of businesses of agricultural products.

Chief Guest of Honour, and Assam’s Excise, Forest, Environment, and Fisheries minister, Parimal Shuklabaidya, who didn’t hold back from saying, “We as a BJP party have crossed the measures for development work in just 10 years of rule (six years of late A B Vajpayee and four years of Narendra Modi’s government) at the Centre, as compared to the Congress party’s rule of 60 years. The terminal market that is being set up here would benefit whole of Barak valley, for which, he pleaded before the land owners of this place, to give it up, if they have any, for setting up this terminal market in the better interest of this region.

The Chief Guest of this occasion, Parimal Suklabaidya also didn’t forget to mention about the present situation in the state. Speaking on this, he said “Just two days back what we have seen in Dhola is horrible and again today at Harinagar of Cachar district two suspected militants entered with huge cache of arms only to be caught by the local residents and beaten to death. After the BJP came to power in 2016 in Assam, a strong force is trying to unstable the government. We all must stay alert from such mischievous acts and maintain peace and harmony between communities and state as a whole.”

Chairman of Cachar District Regulated Market Committee and MLA of Sonai, Aminul Haque Laskar, who played a pivotal role in getting this place, the final nod of the government, to set up a terminal market, looked a happy man on the dais.

After performing a bhumi pujan for this auspicious occasion, addressing the market vendors and farmers, Aminul Haque Laskar, said, “I had to sweat a lot to lay the foundation stone today. In 2015, when the central government gave a go ahead signal to set up a terminal market, the then MLA of Borkhola, Dr Rumi Nath, placed Harincherra of her constituency bordering Dima Hasao to be the rightful place. My struggle with her commenced from there on to set up this terminal market in Ghungoor as the place she identified was not feasible and the market vendors too were reluctant to do business out there. In this melee, the 2016, assembly elections were declared, and she lost her seat and I went on to win from Sonai constituency.”

Aminul Haque Laskar, went on saying, “My winning the seat helped as the present land where this terminal market is getting ready to be set up, is an abandoned area of the veterinary department. The minister (Atul Bora) too held the posts of Agriculture and Veterinary, for which, it was not tough to get the approval for the land to start this terminal market. This area is near the bypass of Silchar town and can connect all the three bordering states of Mizoram, Tripura and Manipur, as also, neighbouring districts of Karimganj and Hailakandi. One can now get plenty of opportunities for employment and ways to improve their livelihood.”

Deputy Commissioner Cachar, Dr S Lakhsmanan present on the occasion, summed it up, “First, we all should come forward to set this terminal market up, and later, see to it that it flourishes to help all grow, along with this district.”

Chairman of Assam State Agricultural Marketing Board, Palit Bora, presided over the function which was also attended by a host of other dignitaries for this momentous occasion.