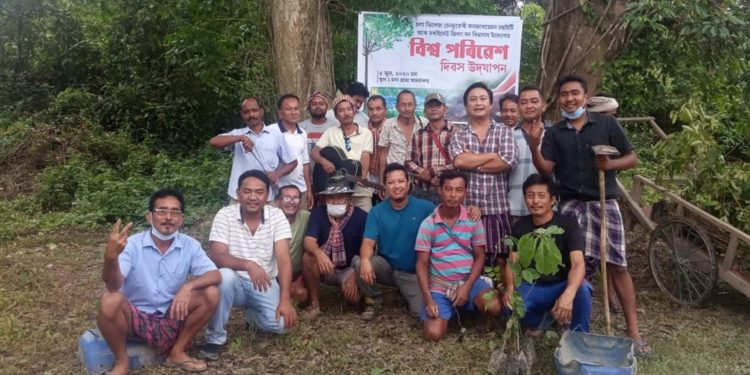 From an effort to preserve the uncommon Gnetum gnemon shrub to declaring the Chala Reserve Forest, a sanctuary, the Tai Khamyangs of Chalapathar Shyam Gaon in Charaideo district are forging ahead with a conservation success story sans government help of any kind.

The Tai Khamyang community which inhabits the fringes of the 683.173 hectare Chala reserve forest became concerned when the Gnetum shrub locally called Khailong by the Khamyangs became on the verge of extinction in the forest habitat.

Pyoseng Chowlu, chairman, Chala Village Sanctuary  Conservation Society,  said that apart from Kosu and Dhekia, the Gnetum is eaten by the Khamyangs because of its high protein and nutritional value.

“The leaves and the seeds of this shrub should be harvested in such a manner that the regeneration and proliferation of the shrub are not affected,” he said.

“However, in recent times people from outside used to cut up the plant in such a manner that there was no regrowth,” he added.

Pyoseng said that the Chala Shyam Gaon and about five or six other villages on the fringes of the forest decided to stop the cutting of the plants and thenceforth began the conservation of the habitat of the Gnetum.

“It became imperative to preserve this plant found only in Sivasagar, Golaghat and Karbi Anglong areas of the North East for ourselves and for the next generations, ” he said.

“This meant protecting the whole forest where it grew,” he added.

“We next decided to conserve the entire land on which it grew which meant the whole forest reserve,” Pyoseng said.

“The forest was declared the Chala village sanctuary by the community and the Chala Village Sanctuary Conservation Society was formed,” he added.

“We have also put up a board and banners regarding this in our village, ” Pyoseng added.

“We keep a close watch on the forest and its produce,” he further said.

“The forest department will vouch that no large tree has been felled in this forest for the past two years or so, something which was rampant earlier, ” he added.

Pyoseng said that the leopard, panther, green viper, several varieties of birds including the hornbill and other smaller animals had found protection and shelter here.