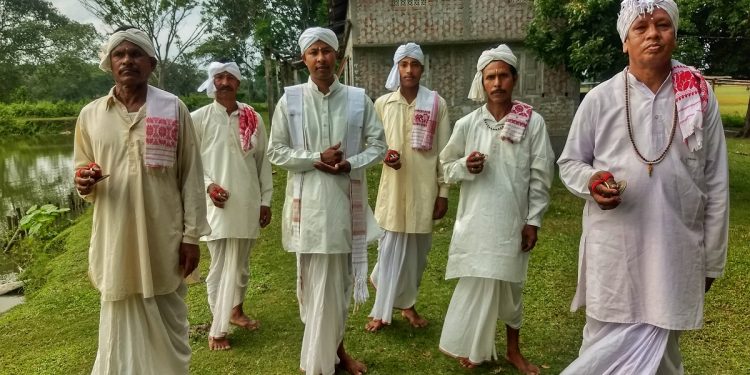 The world has come to a standstill with no immediate signs of resumption of any kind of entertainment programmes.

The COVID-19 pandemic has proved to be a double whammy for the already-struggling folk artistes of Assam.

They are of the view that it has wreaked havoc on their livelihood by forcing them to sit idle in their homes and their future looks gloomy too.

In these times of quarantine and social distancing, all festivals, functions have been cancelled, causing distress and worry among the artistes fraternity of Assam.

The folk artistes of Ojapali, one of the performing folk culture of Assam, with its roots in Darrang district are one of the worst affected.

Over 1000 odd performers are left with no work.

Moreover, majority of them are not tech savvy barring them to use the social media to reach out to an audience or even raise their voice.

Renowned folk artiste of undivided Darrang district, Bapan Sarma, an inhabitant of Bhuyankhat village of Udalguri district,  is getting phone calls from needy artistes but is clueless about how to get help for them.

“The folk fraternity from Darrang and Udalguri who have established this performing art in the world platform  are continuously sharing their problems with me in these trying times,” he said.

“They do not have any money or essentials at home. Whom do I approach to highlight their plight? Will the BJP led government come to their rescue or will leave them to their fate,” questioned Sarma.

He has 13-15 folk artistes including five instrumentalists and eight women in his troupe and most of them are landless and depend on their art for livelihood.

“They depend on monthly programmes. Some of them also work in fields but this year the agriculture sector has been one of the worst hit,” he added.

He also rued that electronically-generated rhythms are already overtaking folk traditions and the coronavirus pandemic has only added to their problems.

“The government must take note of their plight. I have been repeatedly demanding pension for them while noting that a proper database of such artistes must be generated” said Sarma.

Thageswari Bordoloi, another female Ojapali artiste who heads the eight membered ‘Bhuyankhat Chiranjib Mohila Byas Ojapali’ group says, “My father practicised this art form so I was inclined towards it from my childhood and carried on his legacy but the future times are gloomy as the young generation are not interested to preserve their heritage and culture.”

She further said despite having their names enrolled, government’s helping hand have not reached them in this hour of crisis.

“The government should think about us. Where will we go for help,” she asked.

Another artiste of the group, Jayanti Sarma said, “Most of the team-mates of our group are old. We do not have any other source of livelihood than by earning by performing the Assam Chief Minister Sarbananda Sonowal must come forward to help us.”

Ojapali is one of the ancient traditional art forms of Assam.

It is a half dramatic performing art which holds a significant place in the classical music and dance of Assam.

Ojapali, an institution connected with religious and socio-cultural life of Assam, is product of the great Indian classical music.

Ojapali art form contains similarities with the other performing art forms of different states of India.