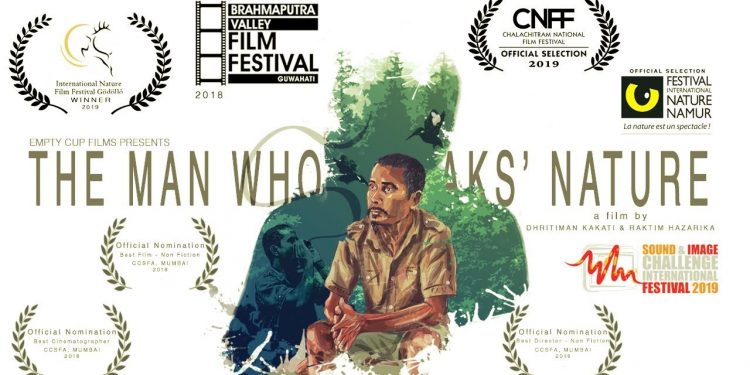 The film was awarded as the Best Short Film in the Professional Films category.

A total of 42 films had been screened under the Professional Films category at the film festival in Belgium.

Moreover, a total of 774 film entries from 82 different countries were received in the Professional Films category.

The Man Who Speaks Nature was screened at the Acinapolis movie theatre of Namur on October 18.

The movie was presented with the Best Short Film award at a function on October 19.

It may be mentioned that Festival International Nature Namur, which had been held from 1995, has now been recognized as one among the five biggest events of Europe.

The eight minute 32 seconds short documentary film ‘The Man Who Speaks Nature’ provides a glimpse into the life and work of Manoj Gogoi, a conservationist based in Kaziranga who has dedicated his life towards the rescue and rehabilitation of snakes and birds in particular.

The movie also attempts to seek the reasons behind his plunge into conservation work and exhibits a peek into the daily work schedule of Gogoi that comes with being a self-styled naturalist known to have rescued and rehabilitated over 4000 species of flora and fauna.

The main persons behind the short documentary film are Dhritiman Kakati, Raktim Hazarika and Prabal Bora.

While Dhritiman has directed and written the documentary, the editing work has been done by Raktim and the promotional work by Prabal.