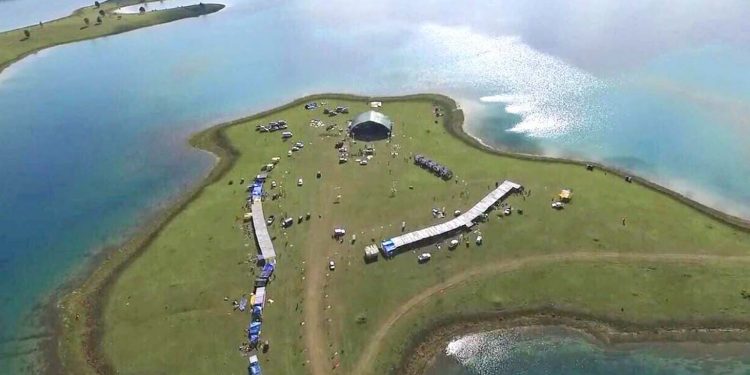 The venue for Falcon Festival at Umrangso.

Umrangso in Dima Hasao district is all set to host Falcon Festival.

The three-day festival, to be organized by the NC Hills Autonomous Council (NCHAC), will begin on November 15.

Umrangso is known as the industrial town of Dima Hasao district.

It is located along the border Assam-Meghalaya border and 127 km from Haflong, the district headquarters of Dima Hasao.

The festival will be held on the bank of Kapili Lake and gold playground near Tungbung village at Umrangso.

Both domestic and foreign tourists are camping in Dima Hasao for the festival.

The locals and the people of Dima Hasao are hopeful that the festival would help attract more tourists to the district as the tourism sector would get more publicity.

From November, flocks of migratory birds Amur falcons start to arrive in Umrangso and to have glimpses of these winged guests, a large number of tourists come to the district.

According to sources, these migratory guests take shelter at Umrangso for around one-and-half-months and leave the area.

The Amur falcon (Falco amurensis) is a small raptor of the falcon family.

It breeds in south-eastern Siberia and Northern China before migrating in large flocks across India and over the Arabian Sea to winter in Southern Africa.

Keeping in view of the movement of Amur falcons, the NC Hills Autonomous Council (NCHAC) has been organizing Falcon Festival for the last several years.

The three-day Falcon Festival will continue till November 17.

A series of programmes have been scheduled to be held during the festival.

Bollywood singer Angaraag Papon Mahanta will perform at the festival.

Besides, an exhibition will be a part of the event with participation of different tribes with their traditional cuisines. Handloom and handicraft products of various ethnic groups will also be displayed at the exhibition.