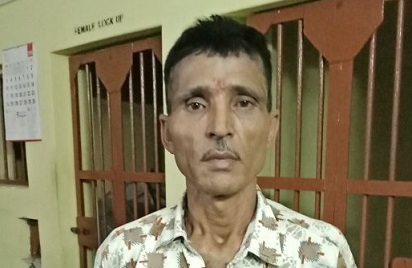 Based on the statement of Sanjit Sonowal, a drug peddler who was recently arrested by police, the Pengaree Police was able to nab drug mafia Rajen Chetry of Bordumsa-Madhapur area in Tinsukia district on late Wednesday evening.

“We raided the residence of Chetry in day time but in vain so we deployed our men in the evening which led to his arrest,” said Sanjiv Saikia, officer-in-charge of Pengaree Police Station.

According to top police sources, Chetry, an inhabitant of Assam along the Assam-Arunachal Pradesh border in between Tinsukia and Changlang districts, was involved in trafficking of various forms of drugs in both the neighbouring States.

Chetry was also behind supplying contraband substances among the youths, women and even students, said sources.

The suspected drug kingpin has been charged with trafficking brown sugar and opium to paralyse the younger generation of the society.

He was also arrested earlier in several cases under Narcotic Drugs and Psychotropic Substances (NDPS) Act including Bordumsa PS case No 23/2015 u/s 21/27, dated June 23, 2015 and Bordumsa PS case No 12/2007 u/s 17/27. Both the cases were registered under NDPS Act by Bordumsa Police in Arunachal Pradesh.

Though no contraband substance was recovered from the possession of Chetry during the time of his arrest, drug peddler Sanjit Sonowal, who was held with around 270 gm of brown sugar on June 3, 2018 by a local women organization at Pengaree Inthem area, had admitted that he bought the brown sugar from Chetry and that both had been running drug trafficking business since long.

Meanwhile, the people of the area including guardians and parents of youths and students from both Assam and Arunachal have expressed happiness at the arrest of Chetry.

On the other hand, Tangjong Langching, officer-in-charge of Bordumsa PS in Arunachal, lauding the efforts of Assam Police, expressed concern over the rapid and unabated rise of drug trafficking and consumption of the same in the border areas.

Langching appealed to the Assam Police and also the general people including the organizations on both sides of the border to stand united and crack heavily on the menace of drug abuse.

“Technical issues including jurisdiction most of the time stand as stumbling block on our way to curb the menace,” regretted Langching.

However, the relentless anti-drug crusades initiated by some of the determined women of Pengaree- Inthem-Ketetong and Mugongpather areas have been generating desirable outputs to this effect and it is expected that these women anti-drug crusaders would inspire the society to join the movement and ensure a drug-free society for all to live in.