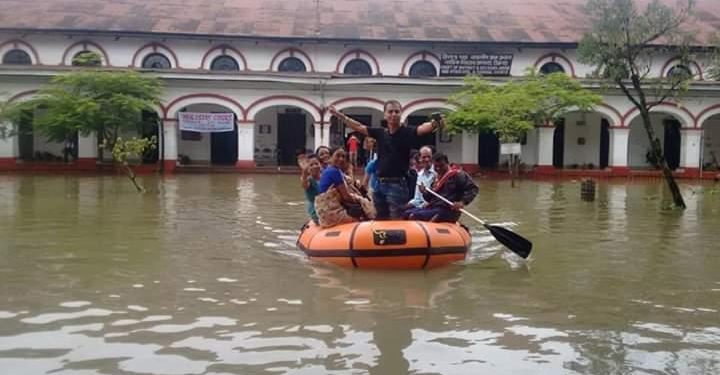 The second wave of flood has brought miseries for the people of eastern Assam’s Dibrugarh with several villages submerged in flood water.

Altogether, 36,921 people in 119 villages were affected in the second wave of flood in the seven revenue villages of Dibrugarh distict.

Dibrugarh district administration has set up 26 relief camps for the flood affected people and 3,184 inmates are staying at the camps.

One fisherman has lost his life after drowning in Buridehing river.

SDRF and civil defense team recovered the body of the fisherman on Friday.

The fisherman was identified as Sanjay Gowala.

He was missing since Thursday after falling into river.

“We are keeping a close watch on the situation. Today SDRF and civil defence teams with the aid of three boats evacuated 184 people from the flood-hit villages in Dibrugarh east and Dibrugarh west revenue circles,” an ASDMA official said.

“Eleven medical teams have been formed and they have been sent to the flood affected areas,” the official added.

“Apart from 26 relief camps, 15 relief distribution centres have been set up. As of today, 3,184 people are staying in the relief camps. They have been provided food and other relief,” the official also said.

The town has been under the grip of severe waterlogging for the last four days with all 22 of its wards submerged by rainwater.

On Saturday, food items were distributed among the people in some of the worst-hit wards of the town.

The incomplete Dibrugarh Storm Water Drainage Project (Main Drain) which is the reason for the massive waterlogging in Dibrugarh town.

The Asian Development Bank (ADB) sanctioned Rs 169.89 crore for the project which is executed under Assam Urban Infrastructure Investment Program (AUIIP) but for unknown reason the project has been stalled since November 2017.