The Assam Power Distribution Company Limited (APDCL) on Sunday issued a clarification after a section of media reported that the office of Assam DGP office is yet to clear electricity dues in crores.

The clarification, issued by the APDCL said: “We have come across a news report published in the digital and social media regarding the electricity bill, which is pending with the Assam’s DGP office.”

“According to the news report, the Assam Power Distribution Company Limited (APDCL) is yet to receive Rs 4.5 crore from this office as electricity revenue.”

“The electricity bill, issued by the APDCL in the name of the police department, is still with the general administration department and following the necessary process, the APDCL will receive its money like earlier occasions,” the APDCL added.

According to sources, the Assam DGP office is yet to clear an amount of Rs 3,72,07,776 to the APDCL as the electricity bill. 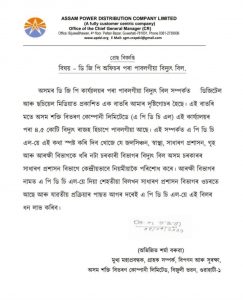 The Assam government registered a total of 611 FIRs for illegal electricity connections and power theft in the month of June.

The APDCL launched a massive drive against power theft and illegal connections at the initiative of chief minister Himanta Biswa Sarma and power minister Bimal Bora.

During June, the APDCL conducted a total of 1,904 raids against illegal electricity connections.

The power distribution company of Assam received Rs 502 crore from its consumers in June and it is yet to get Rs 220 crore, principal secretary to home and power Niraj Verma and the state director general of police Bhaskarjyoti Mahanta informed reporters recently.