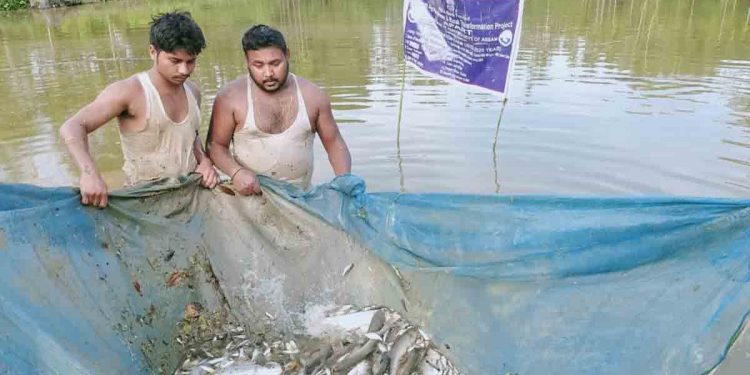 Rituraj (right) with support from one his assistant harvesting fishes from his pond. Image: Northeast Now

The COVID-19 pandemic has left many jobless across the country, thereby aggravating the unemployment scenario.

However, there are still many hardworking and determined educated youths who have become a ray of hope for several jobless youths, showing them the way to become self-reliant and earn more than their earlier jobs.

Rituraj Bhagawati of Balipota village under Lakhimpur Panchayat in Darrang district is one such youth quit his earlier job as a medical representative against a monthly salary of more than Rs 30,000 to turn himself as a scientific fish grower and earn more than Rs 6 lakh over a year.

He hails from the village where fish farming has been practised traditionally and there are a couple of successfully run community fisheries like Lakhimpur Meen Mahal and Suri Pukhuri Meen Mahal.

However, Rituraj was interested in this traditional way of fish farming as its outcome was very limited.

But things changed for him when he met Jyoti Prabhat Duarah, Fishery Development Officer of Darrang after one of their traditional ponds was selected for fish polyculture demonstration under World Bank aided Assam Agri-Business and Rural Transformation Project (APART).

“The meeting with Duarah was the turning point of my career. He motivated me for scientific fish farming and I left my medical representative’s job where I had been engaged since 2013 to devote myself completely to fish farming with new scientific methods,” said the 30-year-old Rituraj while speaking to North East Now.

Rituraj’s father owned two ponds. During 2019-20, one of the ponds was selected for fish polyculture demonstration under APART.

Rituraj was selected as the beneficiary along with 14 others and a Farmer Producer Group (FPG) was formed.

He was also selected as the secretary of the group.

“The inputs were supplied to the beneficiaries through the community procurement process. Proper stocking of carried over seeds, feeding of formulated feed and application of lime and other inputs resulted in the flourishing of his pond with the stock of fishes,” Duarah said.

“Due to the high demand for local fishes during the lockdown, I partially sold about 600 kg of fishes to various vendors,” he said.

“I earned Rs 1.2 lakh by selling fishes from my pond sponsored under APART. Further, during final harvesting, I sold 500 kg of fish and earned Rs 1 lakh from the same pond,” Rituraj added.

“If a youth having his own plot of land can invest Rs 1 lakh from the preparation of the pond to other expenses and spend 4-5 hours a day looking after it, he can easily earn Rs 6-7 lakh per year from a pond of two bigha area,” he said.

“I have invested in the construction of two more tanks of around one-and-half bigha and one bigha in size on my parent’s land through whatever savings I had from my service life,” he said.

“I was encouraged to apply to the District Fishery Development Officer, Darrang, for a license as a fish seed grower and trader,” he said.

“After obtaining a license, I have successfully sold approximately 270 kg of fry (fish seed smaller in size) of Indian major carp from my new tanks, generating gross revenue of Rs 1.1 lakh within a few months,” he added.

“From the second harvesting of seeds, I sold about 400 kg of advanced fry and fingerlings, earning about Rs 1.2 lakh,” he further said.