By 2030, Assam will be a power surplus state and power will be supplied to other states: Sonowal 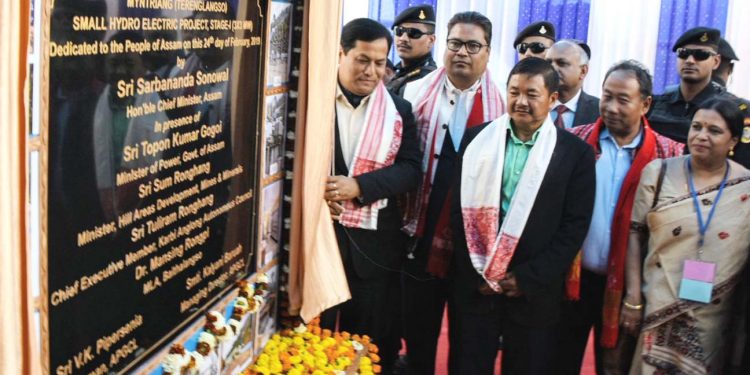 Chief Minister Sonowal unveiled a plaque and pushed a button in the control room of the Hydro Electric Project to inaugurate the power plant.

On the occasion, a public meeting was also held at Baithalangso in West Karbi Anglong which was attended by a large number of people.

Addressing the gathering, Sonowal said, “By 2030, Assam will be become a power surplus state and power will be supplied to other states.”

He thanked CEM Ronghang for his cooperation and the people of the district due to which the project has been completed in time.

Although the hydro power project has been inaugurated, there are allegations that compensation has not been paid for the agriculture land taken for the project to the farmers of nearby villages.

It may be noted that the project involving the total project cost of Rs 145.95 crore was financed by NABARD, Government of Assam, AIFA and APGCL.

Speaking on the occasion Chief Minister Sonowal said that considering the immense potential of hydro electricity in Assam, the state government is exploring ways and means to build small hydro electric projects in the state.

He also said that his government is committed to reach the target of generating 6000 MW electricity in the state by 2030.

He also said his government is working with dedication to provide electricity connection to each 68 lakh families in the state in a bid to illuminate their lives. Guided by Prime Minister Narendra Modi’s Sabka Sath Sabka Bikash,

Sonowal said that his government is giving equal opportunity to all the 33 districts of the state to grow on all priority sectors.

Chief Minister Sonowal also said that immediately after coming to power his government with the help of the Centre is putting in concerted efforts to bring in paradigm shift in education, health, agriculture as well as other areas to provide social security to the people.

He also referred to Rs. 50,000 crore investments in the state in just two years to bolster industrial revolution in the state.

He said that under the scheme the farmers would get Rs 6000 in the bank accounts every year.

He also said the schemes have been launched to lend dignity to the farmers.

Power Minister Topon Kumar Gogoi while speaking on the occasion thanked the people of Assam to cooperate in every possible way for the Power Department to bring about visible changes in the power sector of the state.