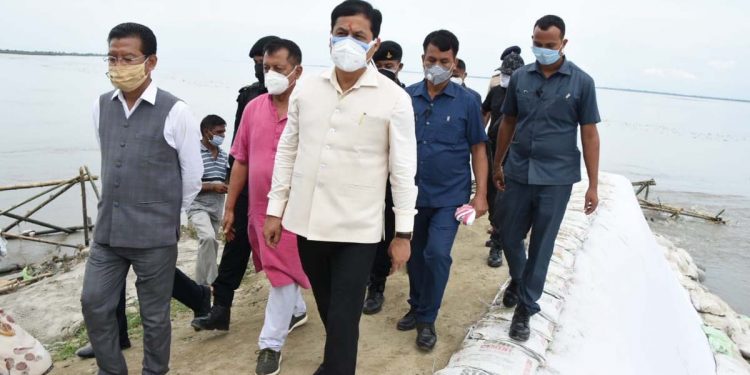 Assam CM Sarabananda Sonowal during his visit to flood and erosion hit areas in Lakhimpur on Tuesday.

Assam chief minister Sarbananda Sonowal on Tuesday visited the flood and erosion hit areas of Lakhimpur and inspected the various embankments in the district.

The chief minister arrived in Dhalpur under Narayanpur Revenue Circle from Gohpur on Tuesday afternoon and straightway went to erosion-hit Jamuguri area of the district.

He visited the worst affected the No. 3 check-bund off the Brahmaputra in Bonpuroi area of Jamuguri.

Speaking to the media persons, Sonowal announced that riverbank erosion had been categorized as a natural calamity in the 15th Finance Commission and works would began as soon as the funds meant for it received.

He also thanked Prime Minister Narendra Modi for creating North East Water Management Authority with Deputy Chairman of NITI Ayog as its President to prepare a project report on flood-erosion problem of the region to mitigate the problem.

Later, the chief minister arrived at North Lakhimpur and held discussions with officials of the district administration on flood and erosion situation.

In the evening CM Sonowal visited the flood and erosion hit areas of Na-Ali in North Lakhimur Revenue Circle.

Chief minister Sonowal also inspected the erosion protection measures being undertaken by the water resources department in Chatrang river at Gohpur in Biswanath district on Tuesday.

A guard wall is being built on the bank of Chatrang river by the water resources department with an expenditure of Rs. 5 crore.

He also said the state is presently battling against numerous challenges like storm, COVID19 and Baghjan gas well fire.

The chief minister appreciated the people of Assam for their patience and resilience at this difficult time.