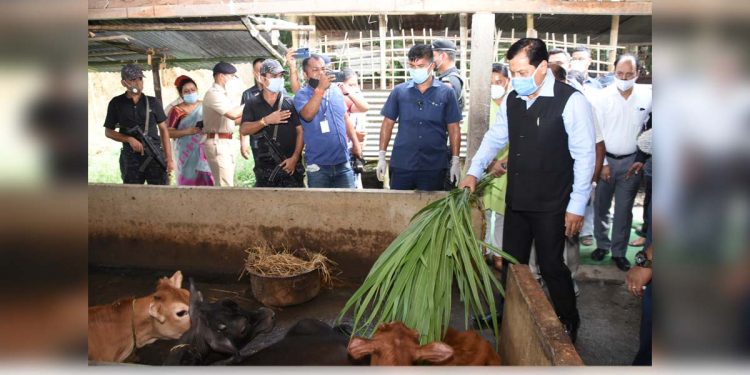 Assam CM Sarbananada Sonowal during his visit to the Bajali Milk Parlour on Sunday.

While visiting the parlour, chief minister Sonowal said, “Agriculture is the mainstay towards Atmanirbhar Asom and if practiced with dedication and resolute determination, agri and its allied sectors can make Assam a self-reliant state.”

Sonowal after having seen the several facets of the milk parlour and the devotion of the people associated with it exuded confidence that the agricultural proliferation started across the state left no doubt to believe that Assam can really be self-reliant in the days to come.

He also said COVID19 pandemic and the resultant curtailment of intra-state and inter-state movement and the introspection have shown that Assam has immense potential to become self-reliant.

Sonowal said if the agriculture and other allied sectors of Assam can be practiced vigorously, the state can really be an Atmanirbhar State in line with Prime Minister Narendra Modi’s call for an Atmanirbhar Bharat.

Chief minister Sonowal said during his movement across the state during the lockdown period, he has seen that the youths of the state have really rendered themselves for the vocations of agriculture.

The government is also with its appropriate intervention helping the individuals and groups to become proficient in agriculture sector, he said.

He said the Assam government is working resolutely to achieve the target set by Prime Minister Modi for doubling the farmers’ income by 2022.

On the dairy sector, Sonowal said though the state’s annual requirement of milk is 2,588 million litres, the state is currently producing 970 million litres per year.

Regarding the shortfall, the chief minister said he has enough confidence on the farmers and entrepreneurs associated with the dairy sector and exuded confidence that with the right kind of endurance and a little bit of investment this gap can be minimised drastically.

He also said the state government has been working very hard with different farmers’ friendly schemes like CMSGUY, Chief Minister’s Krishi Sa-Sajuli Yojana to empower the farmers as well as the farming sector of the state.

During his visit, Sonowal interacted with the dairy farmers, listened to their problems, and assured them that the government would take appropriate steps to solve their problems.

Responding to the demand, the chief minister said the government will seriously consider establishing a milk processing unit at Bajali.

Industry and commerce minister Chandra Mohan Patowary, MP Dilip Saikia, Nalbari MLA Ashok Sharma, and a host of other dignitaries were present during the visit of the chief minister.