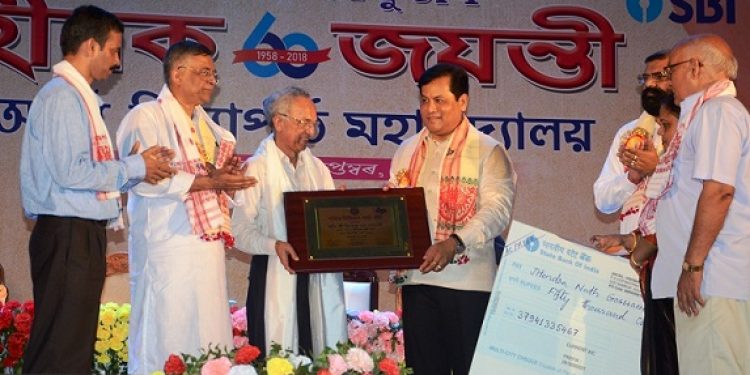 Assam Chief Minister Sarbananda Sonowal on Sunday presented the Pt. Giridhan Sarma Award to Principal Scientist of Chandrayaan I & II, Dr Jitendra Nath Goswami during the Diamond Jubilee celebration of Arya Vidyapeeth College at the college premises here.
After presenting the award to the renowned scientist from Assam, Assam Chief Minister said that he was glad to present the award to Dr Goswami.
“Glad to present the Pandit Giridhar Sarma Award 2018 to renowned scientist Shri Jitendra Nath Goswami at Arya Vidyapeeth College, Guwahati. Had a wonderful time being part of Diamond Jubilee celebrations of the prestigious institute,” stated Sonowal on his Twitter handle.
Also read: Assam: Chandrayaan 2 to be launched soon, says Prof Jitendra Nath Goswami
The Assam CM Sonowal, who also announced Rs 4 crore for the all-round development of Arya Vidyapeeth College, paid tribute to Pandit Giridhar Sarma, the founder of the college and all the teachers, whose efforts have turned it into a ‘great knowledge tree’.
Sonowal tweeted: “My tribute to the founder of Arya Vidyapeeth College, Pandit Giridhar Sarma and all the teachers whose efforts have turned this college into a great knowledge tree. I also announced Rs 4 Cr for the all round development of the college.”
https://twitter.com/sarbanandsonwal/status/1043907045353639937
Apart from a citation, Dr Goswami was also handed over a cheque for Rs 50,000 along with the award.
The award presentation ceremony was also attended by Assam Education Minister Siddhartha Bhattacharya, Minister of State for Health Pijush Hazarika, All Assam Students’ Union (AASU) chief advisor Samujjal Bhattacharya and others.

It may be mentioned that Assam Governor Prof Jagdish Mukhi, on Friday attended the Diamond Jubilee celebration of the college.

In his speech, Governor Mukhi advocated that the main purpose of education should be to produce good and productive citizens.

Educational institutions should embrace the responsibility of nurturing good citizens for the overall benefit of the humanity, he opined.