Youth must stay away from agitations while building a strong work culture: Sarbananda Sonowal 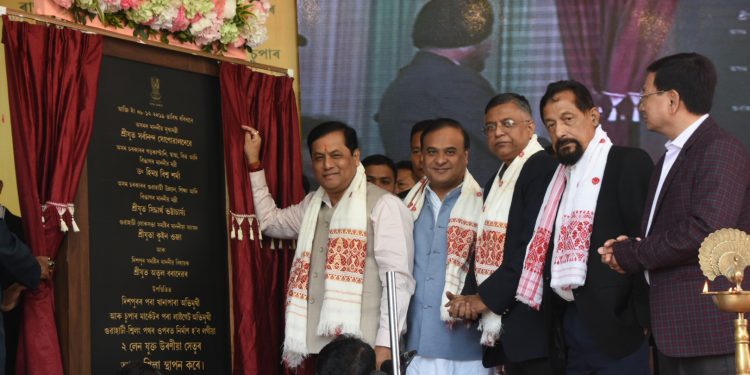 It will connect Dispur to Six Mile and Supermarket to Last Gate in the city.

The total project cost of the flyover is Rs 127.20 crore and it is scheduled to be completed within 36 months.

The longest flyover in the city will start in front of the Janata Bhawan at Dispur and end at the Down Town police point.

On the other hand, the right-side bifurcation will start from the Dispur Supermarket junction to terminate before the traffic roundabout at Last Gate.

Speaking at the programme which was held at Dispur Last Gate, Sonowal highlighted the State Government’s initiatives to make Guwahati one of the best cities in the country.

He asserted that following Prime Minister Narendra Modi’s initiatives to usher in rapid development in the region, the State Government had been making efforts to build Guwahati as the Gateway to South East Asia with rapid infrastructure development.

Urging the people to maintain cleanliness, Sonowal expressed his dismay that some people keep dirtying the place even after the Government’s best efforts to beautify the city.

Saying that cleanliness is next to godliness, he called on the people to play their part as responsible citizens to keep Assam and Guwahati clean and green.

“The young generation of the state must endeavour to put Assam strongly at the world stage with hard work, dedication, honesty and sincerity and they must not while away the most productive time of their lives in movements and agitations,” he said.

“Building a robust work culture in the state should be the prime objective of everyone and youths must not be misled to join agitations based on concocted and baseless grounds”, he asserted.

Sonowal further assured the people that the present State Government, which was formed by indigenous people of the State, would not do not anything to jeopardize the identity of the Assamese race.

Sonowal urged the youth to follow the motto of ‘work is worship and duty is god’ and devote their time and energy in achieving excellence in all fields as the world has become very competitive.

Positive change in the society would not come through agitations and movements but it would come through hard work and dedication as demonstrated by the State Government in the last three and half years, he remarked.

While delivering his speech, PWD minister Himanta Biswa Sarma asserted that after a long time Assam was going through one of the sustained periods of peace and development.

He also said some forces inimical to the state’s interest were trying to create rifts between different communities and stall the development initiatives of the government.

He urged the people not to allow these forces to succeed as Assam witnessed lots of agitations and movements in the last 40-50 years which kept the state underdeveloped.

He also informed that efforts would be made to complete the flyover within two years, much before its schedule completion in three years.

Development works such as construction of medical colleges in Nalbari, Tinsukia, Dhubri, Nagaon etc were going on rapidly while new flyovers would also come up in Maligaon, in the stretch between Rangia-Guwahati, Tezpur, Baihata Chariali etc, he informed.

Elevated flyover at the river bank of Brahmaputra in the city was also being mooted while the rope way project between Guwahati and North Guwahati over Brahmaputra was nearing completion, he stated.

Guwahati Development Minister Siddhartha Bhattacharya, Dispur MLA Atul Bora also spoke at the programme which was attended by commissioner and secretary of PWD Rajesh Kemprai and several other dignitaries.