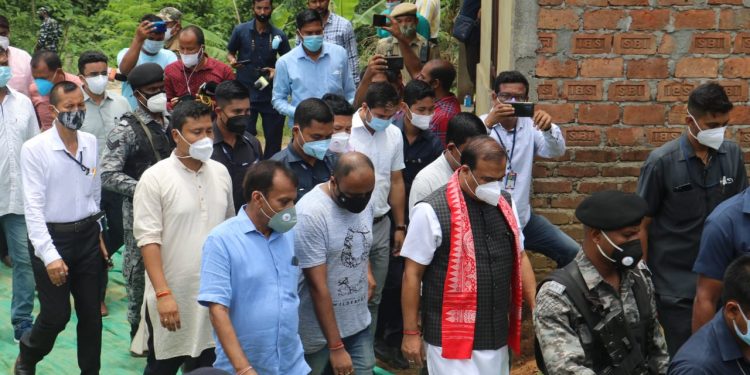 Assam chief minister Himanta Biswa Sarma on Sunday visited the residence of two minor girls, who were found hanging from a tree under mysterious circumstances at Abhiyakuthi village in Kokrajhar district.

The chief minister along with Bodoland Territorial Region (BTR) chief executive member Pramod Boro visited the family and took stock of the situation.

He also directed the BTR IGP and Kokrajhar SP to ascertain whether it is a murder or suicide and find the reason behind it.

The chief minister said the whole incident indicates a conspiracy.

He stated that the prima facie evidence suggested that the girls were either murdered or were forced to commit suicide under pressure.

Meanwhile, the police have detained five persons for interrogation.

Also read:Assam: 5 arrested in connection to death of minor girls in Kokrajhar

“Two of them used to talk with the girls and have deleted their messages from their phones. The whole matter points towards conspiracy and everything will be out after investigation,” Sarma said.

14-year-old Rubita Rabha and 15-year-old Somaina Rabha were found hanging from a tree in a nearby forest area atop a hill on the evening of June 11.

Family members said the entire family had gone to the paddy field for harvest and returned around 4 pm.

When the girls did not return home, they started searching the area and later some villagers found them hanging from a tree in the forest.

The chief minister also visited the house of Gossaigaon MLA Majendra Narzary, who died of post-Covid complication on May 26.