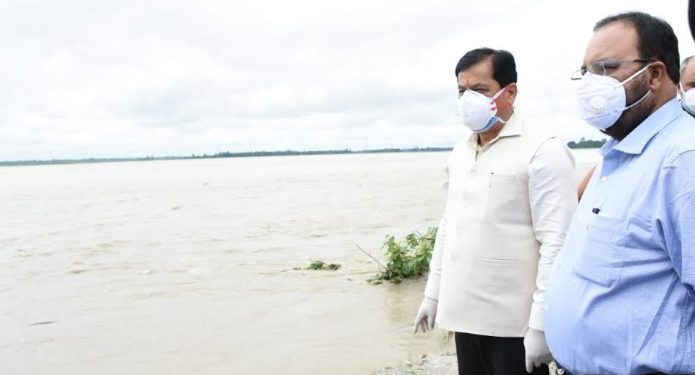 He also visited flood relief camps set up at No 341 Majharabari LP School and No 128 Nowapara LP School by Chirang district administration and interacted with the inmates and took stock of the government services being provided at the centres.

While interacting with media persons during his visit, the chief minister said the flood waters of river Aie have destroyed huge tract of agricultural land and affected large numbers of people in both Chirang and Bongaigaon district.

This has become a serious cause of concern for the local people, he said adding that the State Government would take prompt steps for finding a lasting solution to flood and erosion caused by river Aie.

Referring to a question regarding water flowing down from Bhutan causing flood in Assam, the chief minister said the Central Government would take up the matter with the Bhutan Government for bringing out an early solution.

The Chief Minister further said that he has made personal visits to various flood affected districts to have a first-hand understanding about the damages caused by flood and the quality of services rendered by the local administration to the flood hit people.

He said the local administrations are taking expeditious measures for helping out them and people have also extended full cooperation.

The chief minister also observed that Prime Minister Narendra Modi led Union Government has made sincere efforts to find a permanent solution to the flood and erosion problem of Assam.

Earlier, Sonowal took stock of the COVID-19 and flood situation in Chirang, Bongaigaon and Goalpara districts on Monday night in a meeting held at BGR guest house with senior district officials.