Electronic media requested to run the upper or lower ticker black on January 7 in protest against the Citizenship (Amendment) Bill 2016. 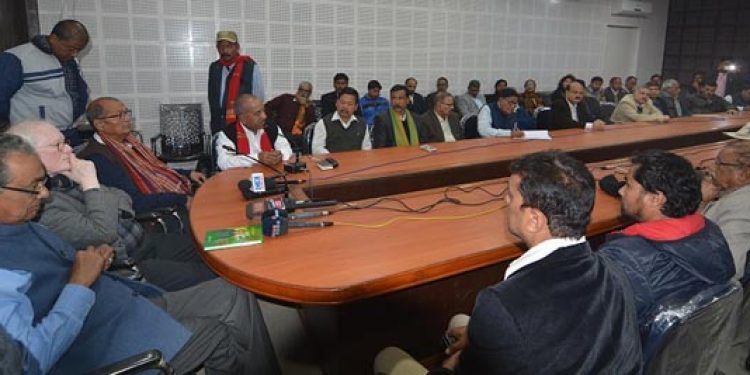 The Joint Parliamentary Committee (JPC)  on Citizenship (Amendment) Bill 2016 is likely to table their recommendations on the Bill in the parliament on January 7. The JPC meeting has recently rejected all the amendments suggested by the Congress and other parties to the Bill while adopting the draft.

“The BJP government at the Centre has already decided to pass the Bill at any cost. The Bill is nothing but execution of the Hindutva agenda of the saffron party. Our protest on January 7 will be against the Bill which has violated the basic essence of Indian Constitution. We will hoist a black flag near our demonstration near Dighalipukhuri in Guwahati on January 7,” said convener of the forum Harekrishna Deka.

“We appeal to the media to keep the editorial columns black and run the upper or lower tickers black on electronic media as to show to the Central government that the society of Assam in general are united against the Bill. The media also has responsibility towards the society and so we appeal to them,” said Deka, a retired Director General of Police of Assam.

Protests by different organisations have started to rock the state against the Bill a day after Prime Minister Narendra Modi assured passage of the Citizenship (Amendment) Bill 2016 in the Parliament while addressing a rally in Silchar on Friday.

“Our protest will be peaceful. We are resorting to peaceful demonstration as our fight is to protect the basic essence of the Constitution, which is secularism as well as to secure the futures of indigenous people of Assam, which will be at stake due to the Bill,” said Udayaditya Bharali, another convener of the Forum.

The Forum also said that they would launch a mass movement soon and would take the facts regarding the Bill to the people in remote areas of the state. “We have also appealed all the organizations in Assam who are against the Bill to come and support us as we believe that a joint movement would only help foil the attempt of the BJP to execute the Bill,” Bharali said.