For 27 km DTP drain, Rs 450 crore was sanctioned but the amount is not utilised till date: Forum 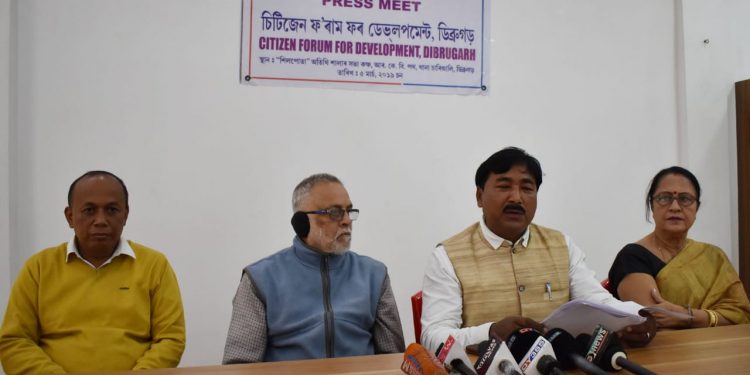 Citizens Forum for Development, Dibrugarh on Tuesday alleged that a strong lobby is trying to delay the Dibrugarh Town Protection (DTP) drain work in Assam’s Dibrugarh.

In a press conference here on Tuesday, Sunil Rajkonwar, chief convener of Citizens Forum for Development alleged that due to a strong lobby, the work of the DTP drain got delay.

“For 27 km DTP drain, Rs 450 crore was sanctioned but the amount is not utilised till date. With monsoon just staring at the face, the government is doing noting to start the work of the drain,” alleged Sunil Rajkonwar, convener of CFD.

He said that Assam Chief Minister Sarbananda Sonowal should take immediate steps for releasing the fund for the construction of the drain.

The work of 9.5 km DTP drain was stalled since November, 2017 after the Madrid based Corsan Corviam Construction company left the project. After the work on the drain was stalled, the district administration has done nothing to re-start the work.

The Spanish company was awarded the Rs 169.89 crore contracts on February 20, 2014 under the Assam Urban Infrastructure Investment Programme.

Then suddenly, in November 2017, the construction company left the project midway after its parent organisation filed for bankruptcy.

“In 2015, Dibrugarh faced massive water-logging and lifeboats have been used during the crisis situation. The Sarbananda Sonowal ruled BJP government should take the matter seriously to solve the perennial problems of water-logging in Dibrugarh but it seems that they are doing nothing to solve the decade-old problem of Dibrugarh,” Rajkonwar told media persons.

Water-logging during monsoon has been a perennial feature of Dibrugarh town. The present drain built in the early 1950s has lost the capacity to flush out rainwater from the town.

“Unchecked encroachment and lack of maintenance have hampered the normal functioning of the storm water drain. Construction works of some drains are going on in Dibrugarh town but these drains will not be sufficient to flush out the rain water from Dibrugarh. Dibrugarh is one of the oldest cities in Assam but the development is less compare to the other cities of Assam,” Rajkonwar added.

The forum on Tuesday submitted a memorandum to Dibrugarh Deputy Commissioner Pallav Gopal Jha about the matter.