Assam: BVFCL shut down after explosion 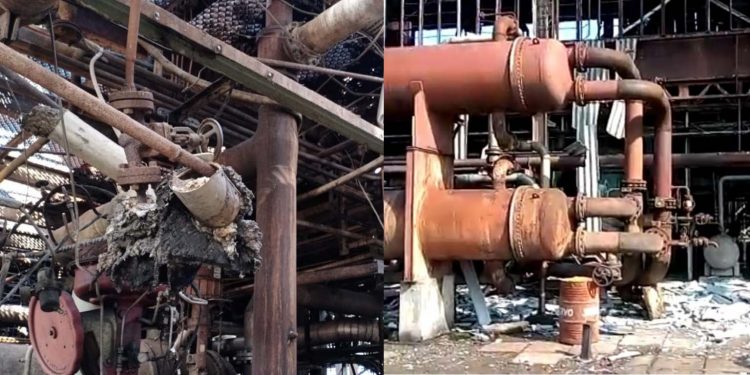 Damaged portion of Unit-2 of BVFCL

A major explosion ripped through the ammonia-urea unit (Unit-2) of the Brahmaputra Valley Fertilizer Corporation Limited (BVFCL) causing extensive damage to the plant.

The explosion to the Namrup-based fertiliser plant occurred at 12.45 am on Monday owing to a technical glitch.

A similar blast took place at the same fertiliser unit on May 19, 2019, leading to heavy losses.

Sources informed that after the blast, a raging fire broke out in the factory building.

The fire was contained nearly after 3 hours. Luckily no one was injured in the blast as most employees had left by then.

“The blast occurred in the pipeline connecting the high-pressure ammonia synthesis gas compressor and the ammonia reactor which goes through the pre-heated furnace in unit 2,” said BVFCL PRO Pranab Bhattacharjee.

“Obsolete and outdated machinery and equipment cause these explosions. The life of a chemical plant is barely 20 years but the Namrup unit is almost 43 years old,” he added.

“We are forced to run it as the proposed fourth unit is yet to be established. The loss assessment is being carried out,” he added.

At the time of the incident, the Namrup-2 unit was generating 200 metric tonnes of urea per day. The last time the blast occurred at the BVFCL plant, it had taken three months to function.

ALSO READ: ‘Fourth unit of Namrup fertiliser plant to be ready within 4 years’

“We are staring at a long shutdown. The losses sustained are expected to be in several crores,” said Tileswar Bora, general secretary of the Namrup Fertiliser Shramik Union.

“The machinery and equipment damaged are also not easily available,” Bora added.

“Earlier, the union fertilisers minister DV Sadananda Gowda during a visit to BVFCL plant in September 2019, announced that work on the fourth unit will begin soon,” Bora said.

“The existing two units (Unit-2 and Unit-3) will be revamped and refitted with new machinery. But still, no progress has been made,” he added.