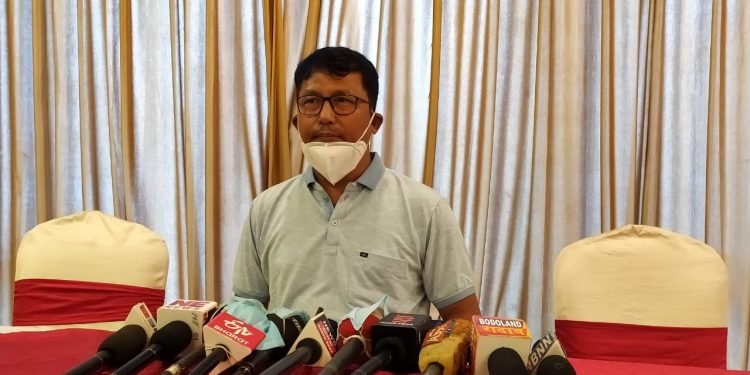 The general secretary of Bodoland People’s Front (BPF), an ally in the state Government-Prabin Boro on Friday reiterated that the BJP had been playing a double standard in the forthcoming BTC election in Assam and trying to create confusion among the voters.

He also alleged that the present State Government could have hands in killing of booth level president of BPF in Baksa district and abduction and killing of party worker at Gossaigaon in Kokrajhar district.

In a press conference held in Kokrajhar on Friday, the party general secretary Prabin Boro said a booth level president of BPF of Ghati in Baksa district-Pranjit Das was shot dead by unknown miscreants on Thursday evening at around 8 pm while he was watching television programme at his home.

He also said another BPF worker of Gossaigaon Azijur Hoque was abducted by unknown miscreants and his body was recovered some days back.

He said both the incidents were unfortunate and it could be a ploy of political ill motives.

He said the BPF had doubt of political murder on both the incidents and Government’s hand could be behind these heinous acts.

He also said Kokrajhar MP Naba Kr Sarania reached the spot of incident in Ghati in Baksa district within half an hour that indicates the planned murder.

Boro said the Government could nab the culprits involved in the abduction and killing of Azijur Hoque of Gossaigaon immediately but police had not taken keen interest to find out the culprits which is clear indication of Government’s hands.

He said the Government should arrest the culprits involved in the killing of Pranjit Das of Baksa if there is no hands of the Government.

He also alleged that the state Government could have been using Gana Suraksha Party (GSP) of MP Naba Kr Sarania to create ruckus in BTC region.

Replying to question, Boro said Governor Rule was prevailing in BTC but despite this fact, the killing incidents are taking place and it is happening because of government’s involvement.

He said the BJP had been playing dual standard in BTC for but the BPF has been maintaining restraint.

The relation between the BJP and BPF is running well in the State but it is the BJP which is trying to wipe out BPF led by Hagrama Mohilary from power in BTC, he said adding that the BPF will fight along in BTC election and will form the next council Government.

The ABSU appealed the district administration to arrest the culprit and punish the guilty as soon as possible.