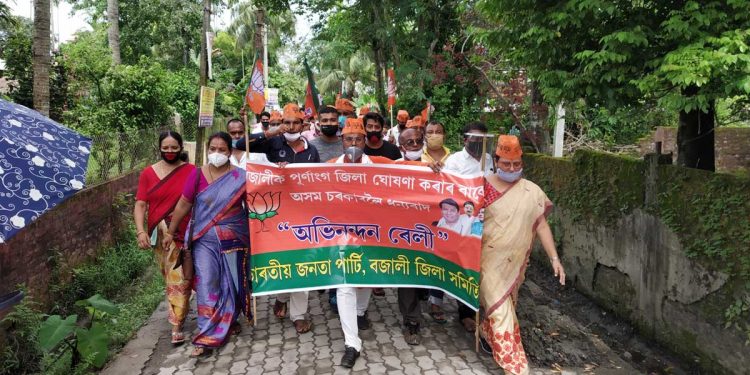 Members of the ruling Bharatiya Janata Party (BJP) took out a huge procession in Pathsala town on Wednesday after the state government declared Bajali as the 34th district of the state on Monday.

It began from the BJP office and it was led by district BJP president Nagen Choudhury.

It may be mentioned here that the demand for declaring Bajali as a district was raised a long time back.

It may be mentioned here that Assam Chief Minister Sarbananda Sonowal on Monday chaired a Cabinet meeting in which it was decided to upgrade Bajali subdivision to a district.

The Cabinet decided to upgrade Bajali subdivision to a district for which 10 officer level posts and 85 other posts would be created.

Several other decisions were also taken in the said meeting and one of these was to approve the Assam Non-Government Education Institutions (Regulation of Fees) Rules 2020.

People of Bajali have expressed their immense happiness and satisfaction on the Cabinet’s decision to upgrade the subdivision into a district.

They feel that once the subdivision becomes a full-fledged district, an array of developmental activities will take place.

“We are happy that finally our demand has been fulfilled. The area would now witness a new dawn of development,” said a local resident.