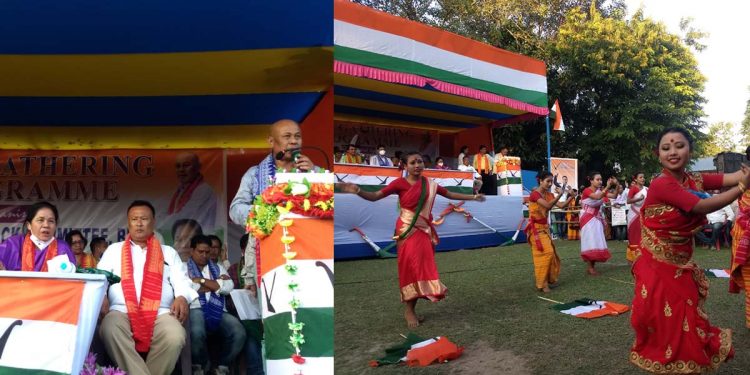 The Bharatiya Janata Party (BJP) has betrayed the Koch-Rajbongshis and Adivasis by not keeping its promise to grant ST status to them, said Bodoland People’s Front (BPF) president Hagrama Mohilary.

Mohilary said this while addressing a programme of more than 10,000 people in a women mass gathering and joining ceremony at Dimakuchi under Bhergaon BTC Constituency in Udalguri district on Sunday.

The former BTC chief said: “The BJP has betrayed the Adivasis and Koch-Rajbongshis. They were promised ST status but it has never been granted.”

He also said, “The Centre and state government committed to releasing a special package of Rs 1,000 crore for the development to BTC, but only Rs 600 crore has been released.”

Hagrama promised the voters of schemes for inclusive growth and development if BPF is voted back to power including.

He also assured of providing ‘land pattas’ to those residing in government lands.

Mohilary refuted allegations of corruption during his regime and asserted that during the Governor’s rule several inquiries were conducted but no substantial evidence was found.

He further claimed that the BPF party has continued its alliance with the Bharatiya Janata Party (BJP) at Dispur and but mudslinging politics have only prevailed as the BJP leaders continue to attack the BPF in election rallies.

Assam Cabinet Minister and BPF legislator Rihon Daimari exhorted the gathering to be a part of the massive campaign of the party and be stakeholders of peace and development in the Bodo belt.

Daimari further asserted and expressed confidence that BPF would form government in the council for the fourth consecutive term.

Paneri MLA Kamali Basumatary while addressing the gathering of women at Orangajuli TE under under Nonoi Serfang BTC constituency lambasted the United People’s Party Liberal (UPPL) alleging that the party has been spreading false information among voters to malign the image of BPF.

She asserted that the Bodo belt has been witness to growth, development and peace under the tenure of BPF and expressed confidence that the people would vote for the party to bounce it back to power.