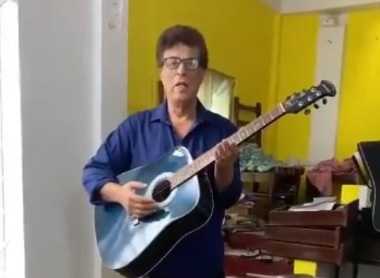 Amid the on-going COVID-19 pandemic, Assam is plagued by its annual flood menace.

However, in spite of all these negativity, an artiste has exhibited some rays of optimism.

Syed Saadulla, the 71-year-old musician from Dibrugarh is spreading hope and positivity through music.

Syed Saadulla, a former All India Radio artiste has been drawing accolades in social media for a video of him singing the Assamese classic song ‘Luitor Boliya Baan’ in knee-deep water.

The video has gone viral on social media.

Originally sung by Jayanta Hazarika and written by Bhupen Hazarika in 1968, the song expresses the singer’s feelings towards the Brahmaputra or Luit as the river is popularly called in the State.

Saadulla was of the view that he wanted to inspire people to overcome hurdles in life through the video, according to reports.

Since being posted, the video has been widely shared on social media with many appreciating the veteran artiste for spreading positivity during trying times.