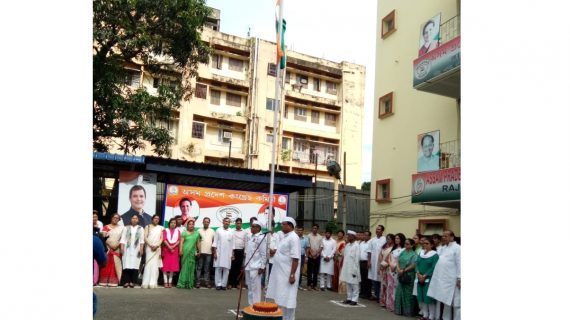 Commemorating the 72nd Independence Day of the nation, the Assam Pradesh Congress Committee (APCC) president Ripun Bora hoisted the Indian tricolor at Rajiv Bhawan, the party headquarters in Guwahati at 8:30 am on Wednesday.

The programme was attended by a sizeable number of State Congress leaders and workers.

Meanwhile, some sections have criticized the APCC president of keeping his footwear on during the flag hoisting.

However, the APCC president has rubbished such criticism saying there is nothing wrong hoisting the national flag by putting on the footwear.

Meanwhile, the Rashtriya Swayamsevak Sangh (RSS), Assam unit also hoisted the national flag at its regional office in Guwahati on the occasion of 72nd Independence Day.

This is an exception to the tradition of RSS of not hoisting the national flag on days like Independence Day and Republic Day on earlier occasions.

This act of the Hindu radical organization has been criticized time and again by several quarters.

However, the RSS has changed its earlier stance after the Narendra Modi led BJP government took the reins of power in New Delhi in the year 2004.

From then on, the organization has been hoisting the national flag regularly on days of national importance.