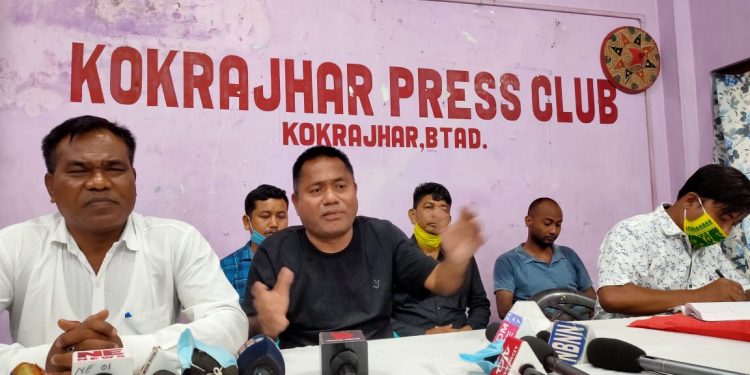 The All Koch-Rajbongshi Students’ Union (AKRSU) on Thursday has decided to extend support to the alliance partner of BJP, BPF and AGP in the ensuing BTC election.

The BTC election scheduled for April last was postponed due to the coronavirus pandemic.

The students’ body made it clear that they will support the party which gives priority to their issues for solution.

In a press meet held at Kokrajhar Press Club, the advisor of AKRSU, Pradip Kr Ray said the students’ body will support the combined force of BJP, BPF and AGP in the forthcoming BTC election.

He said the coalition government of BJP, BPF and AGP in the State had decided to create Kamatapur Autonomous Council (KAC) in the undivided Goalpara district and Koch-Rajbongshi Development Council for the socio-economic development of the community.

He, however, said the AKRSU will not die down for their demand for separate state of Kamatapur.

The president of AKRSU, Arun Kr Ray and general secretary Gokul Barman were also present in the press meet.

They also said that a delegation of the AKRSU had called on Assam chief minister Sarbananda Sonowal and Minister of WPT&BC Chandan Brahma recently and apprised them to expedite the process of creation of Kamatapur Autonomous Council and Koch Rajbongshi Development Council as early as possible.