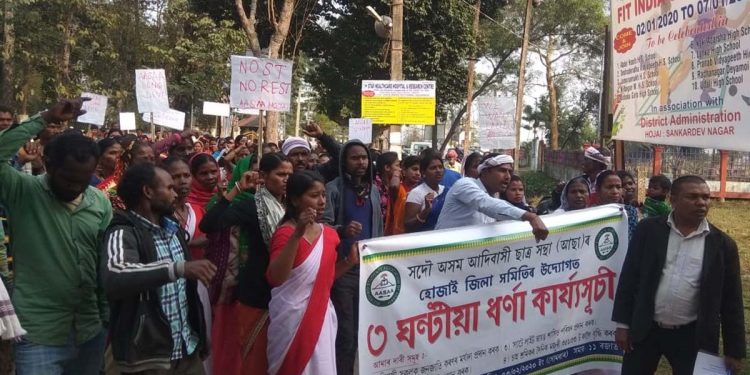 Around 500 people from the Adivasi community staged a three-hour sit-in demonstration at Hojai on Monday demanding inclusion of the community in the list of Scheduled Tribe (ST).

The protest was staged under the leadership of the All Adivasi Students’ Association of Assam (AASAA).

A memorandum was sent to Prime Minister Narendra Modi through the Hojai deputy commissioner.

The memorandum was received by Satib Das, assistant commissioner and executive magistrate of Hojai district.

Through the memorandum, the AASAA demanded that the Adivasis living in Assam be granted Scheduled Tribe status at the earliest.

The association also demanded that land patta be provided to the Adivasis, no Adivasi village be included in the Bodoland Territorial Region (BTR), protection of the lands of the Adivasis within the BTR and entire Assam.

They also demanded the formation of Adivasi Autonomous Satellite Council in Assam.

The AASAA urged the PM to safeguard the Adivasis as an indigenous community under Clause 6 of Assam Accord.

They also demanded that Rs. 350 be provided as a daily wage to the tea garden workers of Assam.

“Today, in the entire state, the AASAA staged demonstrations and submitted a memorandum. We are positive that soon our demands will be fulfilled, otherwise, we will launch statewide agitation,” Dharam AASAA Hojai district committee general secretary Raj Gour said.

In the memorandum, it was also stated that if the government fails to consider and grant Scheduled Tribe status to the Adivasis during the ongoing Budget Session, the AASAA will go for a year-long and series of statewide agitation like rail-road blockade and tea garden bandh.

The association also threatened to carry out agitation like naked and self-emulation agitation all over Assam.