Assam’s very own Adil Hussain is winning the hearts of movie connoisseurs again with his spellbinding performance in the new movie – Nirvana Inn.

The movie is a psychological horror.

Adil plays the character, Jogi Chakraborthy who takes up the managerial position at Nirvana Inn, a quaint mountain resort in Himachal Pradesh.

The movie is directed by Vijay Jayapal and this is his second movie.

It was premiered at the 21st Busan International Film Festival. 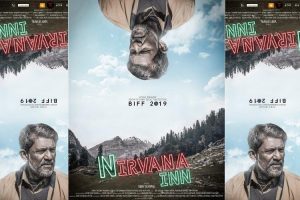 ‘Nirvana Inn’ was one of the 29 projects selected for the programme, Busan Asian Project Market at the Busan International Film Festival.

It premiered under the ‘A Window on Asian Cinema’ section at the 24th Busan International Film Festival.

Director Vijay Jayapal had once said the idea of the movie came after reading an article about the Germanwings Flight 9525 crash where the pilot had crashed the plane, since he was having some suicidal thoughts.

The movie is entirely shot at Manali in Himachal Pradesh and Kerala.

Also read: Once I rented a thatch house for Rs 150: Adil Hussain

The movie has already received rave reviews from critics all over with special accolades for Adil.

Adil character moved to Himachal Pradesh from Manjuli in his native state of Assam, where he worked as a boatman and Bhaona performer.