Assam: Adil, Utpal among others dissociate from Pondicherry film fest

The second edition of the Pondicherry International Film Festival was scheduled for September next. 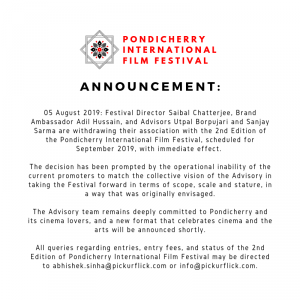 The decision has been prompted by the ‘operational inability of the current promoters to match the collective vision of the advisory in taking the festival forward in terms of scope, scale ans stature, in a way that was originally envisaged’

This was stated by Adil, Utpal and others in a release that was shared in social media on Monday.

It further stated that the advisory team remains deeply committed to Pondicherry and its cinema lovers, and anew format that celebrates cinema and the arts will be announced shortly.

The statement further stated that all queries regarding entries, entry fees, and status of the second edition of Pondicherry International Film Festival may be directed to [email protected] or [email protected].